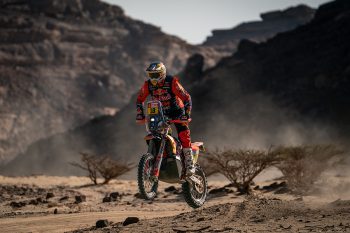 Australian off-road legend Toby Price has captured his first stage win of the 2022 Dakar Rally, as Adrien Van Beveren re-gained the overall lead at the conclusion of stage 10.

With a relatively late starting position into the 375-kilometre timed special, Price focused entirely on his roadbook, the tactic allowing the two-time event winner to deliver a near faultless performance.

“It’s been a really good day for me today,” Price explained. “I focused on my roadbook the whole way and did a good job with my navigation with only a couple of small mistakes over the whole stage.

“I’ve moved nicely up the order overall, but there is still a bit of a gap to the front guys. As we know, anything can happen in rally, so I’ll give it my all for these last two days and we’ll see where we end up.”