Australia’s Hunter Lawrence made a solid start to the 2022 Monster Energy Supercross Championship in 250SX West, charging through the field to finish third at Anaheim 1. The 22-year-old discusses a variety of topics from the season-opener in this Conversation interview from post-race. 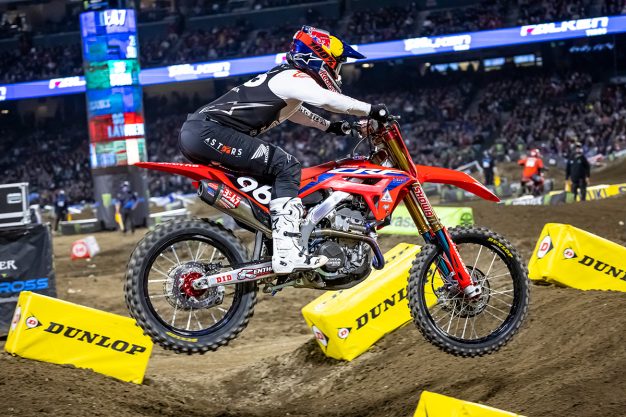 You were a little bit buried in the pack at the start of the main event in the chaos that unfolded, what was it like to sit through that 15 minutes and a lap to see where you will end up and then have things come together in the last few laps the way that they did?

Yeah, my start was pretty bad, the gate flinched a bunch of times and seven guys hit the gate so I thought it was going to be a restart because it didn’t drop when it first moved, then I thought alright let’s go race. Yeah, it wasn’t easy, but just pretty much keep passing guys until there is none in front of you, which the case was third tonight so it’s okay.

With the night that we had, with just so many guys having crashes, the chaos of the LCQs where the factory guys aren’t even making it in the 450 class, does that weigh on your mind at all while you are racing or is it once the gate drops its time to send it?

I don’t think it’s like send it… in a way you go out and do the best of your ability but try and ride in your limits if you can, obviously you have to go above sometimes. It’s never good to see guys get hurt, but I’m just focused on myself.

You were the lead Lawrence in GPs, but whenever you have all come to America, Jett has kind of taken over that and I feel like you’ve been undervalued maybe. I know you had a solid season last year, second and third in the championships, but I feel you have more potential, more potential than other’s realise – maybe because the fans haven’t seen you at full health. Do you feel with a ride like tonight, coming through the pack, you are approaching your full potential and America will start to see a full potential Hunter Lawrence?

Yeah, for sure, it was only third tonight so nothing to jump up and down about, but I feel good and there’s a lot of rounds to come. I’ll just keep doing my thing, working hard week in week out and we will see how we go. It doesn’t really bother me if people think Jett’s better or whatever, I think Jett sucks so… [laughs]. 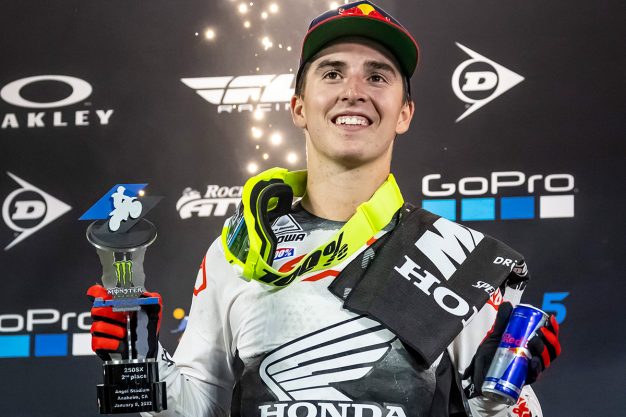 We heard earlier from the perspective of Seth [Hammaker] on that last lap, I wish we could have Garrett [Marchbanks] here because it would have been epic to have the three of you talk about it because that was a wild last lap. Let’s hear your perspective because coming to two to go you were three and a half seconds back, so not only did you close that gap to steal a podium spot but you ‘knocked Garret off’ as well and had that tight fight with Seth come to that finish jump. Just walk us through that last lap.

It was kind of a hail mary last lap to be honest! I was like a little sketchy – I landed on a few tuff blocks. I didn’t knock Garrett off, I passed him clean, and I probably could have dive-bombed Seth a little harder, but I thought I was probably crossing the limits, I thought not necessary. I just gave it my all, I knew I was closing in and just yeah I really pushed those last laps. I knew I was fitter and stronger, so that’s just all it was and I was just going with it.

When you say hail mary was on your mind, did you just tell yourself podium or nothing or was it just you wanted to catch those guys and see what happens?

I mean, they’re just like right there, it’s so close so why not go for it. It’s not really rolling the dice because everything we do is a calculated risk, but yeah it was so close so would be like a pussy to just settle for fourth or whatever.