Roczen makes it count in 450SX with Anaheim 1 victory 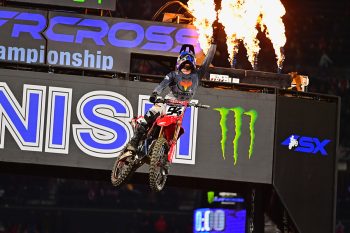 Team Honda HRC’s Ken Roczen has won the opening round of the 2022 Monster Energy Supercross Championship at Anaheim 1, as Christian Craig struck first in 250SX West.

It was a deserved win from Roczen in a relentless 450SX main event to open the season, going on to win by a full 7.296s margin and take the early red plate in the series.

Behind him is where the action happened, ultimately seeing number one plate-holder Cooper Webb (Red Bull KTM) score second ahead of a determined Justin Barcia (TLD Red Bull GasGas).

Earlier, Team Honda HRC’s Chase Sexton had been challenging Roczen for the lead until the midway point when he made a minor error and tucked the front, only to go down more heavily soon after in the whoops and dash his hopes of a podium altogether.

Next, Jason Anderson (Monster Energy Kawasaki) was on par for a podium, passing Barcia for P2, but being taken down almost immediately after with three minutes to run, which set the ever-crafty Webb up for a run at the podium into second once he made his way through on Barcia.

Sexton eventually fought back to fourth position, just ahead of Marvin Musquin (Red Bull KTM), while a quiet ride from Eli Tomac on debut with Star Yamaha resulted in P6 across the line.

In 11th, after circulating inside the top three at the beginning, was Adam Cianciarulo (Monster Energy Kawasaki), however, in the end, it was Roczen who stood up when it counted heading into Oakland next Saturday night. 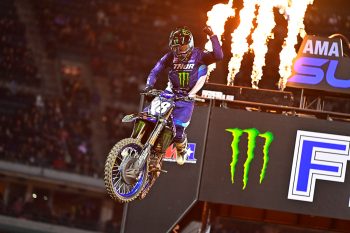 Capping off a dominant day for Craig, he stamped his authority on the field at A1, going on to take victory by 5.625s and maximum points as a result.

It wasn’t completely straightforward, however, finally working his way by the fast-starting Vince Friese (Smartop Bullfrog Spas MCR Honda) on lap four and then maintaining the lead from there.

Behind him, an impressive effort from Seth Hammaker (Monster Energy Pro Circuit Kawasaki) saw him stand on the podium as runner-up, keeping Garrett Marchbanks (Muc-Off FXR ClubMX Yamaha) at bay in the closing stages for position, but it was Team Honda HRC’s Hunter Lawrence who lit things up on the final lap.

In one of the rides of the night, Lawrence was around 14th on the opening lap and clawed his way all the way back to third – passing Marchbanks on the last lap and almost making a move on Hammaker in the final turn of the race.

That was the podium, Craig winning from Hammaker and Lawrence, with Marchbanks solid on his way to P4. Friese crossed the finish in fifth on return to the class.

Disaster struck reigning eastern regional champion Colt Nichols in the first heat, crashing heavily in the second set of whoops while leading and appearing to sustain a left arm injury that ruled the Star Racing Yamaha rider out of the evening altogether.