Another win achieved by Sanders at Dakar in stage six 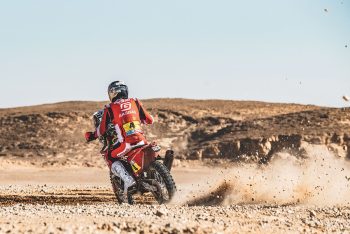 In-form Australian Daniel Sanders has delivered GasGas Factory Racing another win on stage six of the 2022 Dakar Rally, the race currently led by Sam Sunderland at the midway point.

At the end of a wild opening six days of desert racing at the 2022 Dakar Rally, Sunderland holds onto the top spot of the provisional overall leaderboard, while Sanders claimed his second stage win of the race.

The stage win sees Sanders move up to third in the overall provisional classification. Shortened due to safety concerns, stage six saw riders head back to the bivouac early, where they’ll remain for tomorrow’s official rest day.

“It was going really well for me today and I guess it ended well actually with another stage win,” Sanders said. “I started off strong, a bit like I have all week, but it was soon pretty clear that the stage was pretty chewed up from yesterday after the trucks had raced through it.

“So, then it was a case of trying to focus on the dangers in the road-book, but because of how the stage was, there were plenty of additional dangers to keep an eye out for.

“I’m a little disappointed that today was cut short, though. There was a long day ahead where it would have been possible to make up some time, but I’m happy to have taken another stage win and I’m looking forward to next week.”

Despite a couple of close calls, the two-time Dakar champion Toby Price (Red Bull KTM) safely arrived at the end of the special in eighth place. Lying 12th in the provisional overall standings, he trails the leader by just under 40 minutes.

Unfortunately, third of the Australians Andrew Houlihan (KTM) has unfortunately been ruled out with a rib injury, suffering fractures in an incident during yesterday’s stage.