SX Global formed for 2022 under the leadership of Australian group. 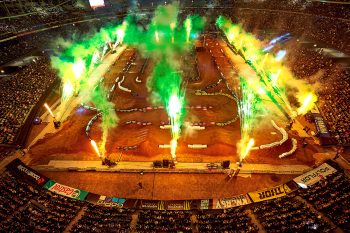 A new Supercross World Championship will be launched in 2022, the Australian creators of the high-profile AUS-X Open selected by the FIM in a decade-long commitment that will be detailed in January.

SX Global has been formed to operate the venture, which comes just three months after it was revealed in September that the US-based AMA Supercross series wouldn’t be retaining its international status.

“After a strong and fruitful relationship over the last two decades between FIM, Feld Entertainment and AMA, it is now time to start a new journey to ensure a bright future for supercross,” commented FIM president Jorge Viegas.

“In order to support the growth and commercial viability of the series, the FIM believes that SX Global has the expertise and the ability to deliver a first class FIM Supercross World Championship. The new series will offer exciting races thanks to the passion and extended experience of the SX Global team, with a plan that will gradually expand the championship to new countries and territories across the world.”

SX Global comprises of AUS-X Open creators Adam Bailey and Ryan Sanderson, as well as Tony Cochrane, who has been named president of SX Global and was instrumental in the growth of Australia’s V8 Supercars Championship prior to departing at the end of 2012.

According to the announcement, ‘complementing this highly-experienced team will be one of the world’s leading financial powerhouses with an established track record of investment in global sport properties, to be announced when SX Global officially unveils its plans for the 2022 FIM Supercross World Championship along with confirmation of new partnerships early in the new year’.

“It’s been a tremendous journey over the past five months to bring our team together with some of the most experienced people in all facets of motorsports now coordinating a sharp focus on Supercross and its global expansion,” Cochrane stated.

“We would very much like to thank the FIM for their strong support of our vision and plan and in particular its president, Jorge Viegas, who has shown great leadership in working to bring this together in such a short timeframe. Fans have been demanding world class Supercross in so many countries – it’s a special day for all of those fans and at the end of the day, fans are our number one consideration.”

SX Global will develop and manage a new international series commencing in 2022, however, details of the championship are yet to be exposed beyond confirmation that the incoming company has attained the rights. The group has also recently indicated it will continue to operate the Australian Supercross Championship.

Managing director – motorsport, Bailey – a former professional-level competitor himself – added: “Supercross’s popularity and growth globally has surged in recent years, so it’s fitting we can now take the sport to the world stage.

“We intend to uncover new supercross champions from all corners of the globe, while celebrating and elevating current riders to be true international stars. We’ll showcase their incredible athletic ability and fearlessness to the world. We look forward to working collaboratively with the entire motorcycling industry to showcase supercross to the world.” 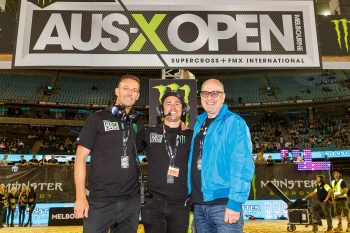 Sanderson, who is managing director – commercial, added: “The best part of supercross is it appeals to all ages – it’s going to be special for fans to see the world’s best riders competing for ultimate glory.

“While we want the series to be a level above in terms of what’s happening on track, equally fan experience will be front and centre in our decision making to ensure we create memorable moments for both fans and viewers at each event.

“Supercross’ offering is unique as a dynamic sport delivered in a family friendly environment combining live action and entertainment. SX Global is going to bring you the best stadiums in the world, highest level of production, pyrotechnics, music and excitement. We can’t wait!”

From 2002 through to 2006, AMA Supercross – with FIM world championship status – commenced in December and visited Switzerland, Holland, Spain and Canada before settling into a recurring domestic schedule in the US. Toronto then became a regular fixture and served as the lone international round through until the 2017 season.

Previous to that, low-profile world championship series had taken place in European countries, but it has always been America considered to be the pinnacle of the sport globally. A number of standalone events are still successfully promoted in Europe including those in Paris and Geneva.

AUS-X Open – first staged in 2015 – organisers have operated an S-X Open FIM Oceania Supercross Championship under direct FIM sanctioning in recent years, which included Australia and New Zealand prior to the pandemic, while also assessing additional options in the region. It hasn’t been held since the 2019 series won by Jason Anderson.