Despite still dealing with continued, prolonged disruptions from the pandemic, 2021 proved to be an incredibly eventful year on the racing front. It’s time to look back at some of the greatest races, moments and personalities of the year as we hand out the 2021 MotoOnline AUS Awards. 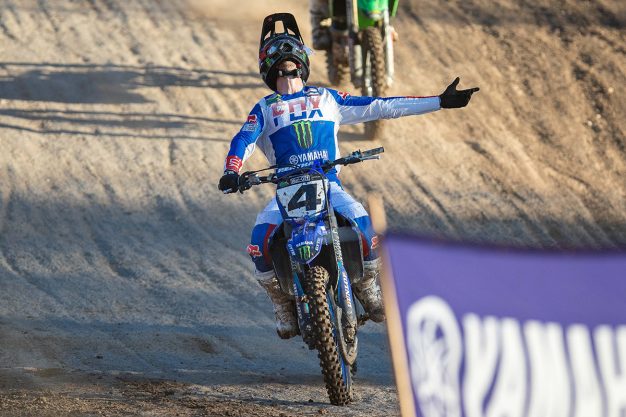 National Rider of the Year – Luke Clout:
For a three-round series, CDR Yamaha Monster Energy’s Luke Clout should’ve been written off after the Wonthaggi opener of the Penrite ProMX Championship. After suffering a rare mechanical DNF in the second race due to a shock malfunction, he was suddenly 23 points in arrears of KTM Racing Team rookie Regan Duffy and only just inside the top 10. Clout came out in anger over the remaining two rounds, taking a perfect 50 points at both Canberra and Maitland to snatch the championship lead – and ultimately the title – by just three points from Duffy. Even with that Wonthaggi blemish, there’s little doubt that Clout is the deserving champion and was the man to beat this year.

International Rider of the Year – Cooper Webb:
2021 proved that you can never discount Cooper Webb. The 2019 450SX champion looked down and out after the first two rounds of the Monster Energy Supercross Championship, but the Red Bull KTM racer refused to give up. A win at Houston 3 reignited his campaign and, when his arch-rival Ken Roczen went on a searing-hot win streak, Webb went on the offensive and upped his game. Webb used all of his racecraft, determination, speed and attitude to get under Roczen’s skin and it worked. A three-race win streak at the Arlington residency swung the momentum in Webb’s favour and knocked the wind out of Roczen’s sails. From that point on, Webb maintained solid results and an imposing on-track presence on his way to recapturing the 450SX championship.

Off-Road Rider of the Year – Daniel Sanders:
After finishing a remarkable fourth on debut at the Dakar Rally at the start of year, 2021 has been a year where Daniel ‘Chucky’ Sanders has made a huge impression on the rally racing scene. In June he slid from KTM to GasGas Factory Racing to spearhead the Spanish brand’s rally effort and it didn’t take long for him to make his mark. He finished fourth at the world championship opener at Kazakhstan and the Silk Way Rally (where he won several stages), before earning a hard-fought podium at Rallye du Maroc. It’s been an impressive year for the debutant and there’ll be plenty of people keeping tabs on his progress at the 2022 Dakar in early January.

Rookie of the Year – Regan Duffy:
Rookie seasons don’t get much better than the one KTM Racing Team’s Regan Duffy had in ProMX. The teenager stormed to the overall MX1 win at the opening round of the championship, then rode with an impressive level of maturity to retain the red plate until the bitter end. In the process, he answered a lot of people’s questions about his hard-pack riding prowess when he finished tied on points for second (third on countback) at Canberra. Despite getting pipped for the crown by Luke Clout at Maitland, Duffy is one of the most promising young talents Australia has seen for some time. Unfortunately, in October he suffered a horror crash at a WA race and is currently on a long road to recovery – expected to sign a contract to race in Europe next year, but that plan has since been put on hold. We hope to see him back and healthy in time.

Personality of the Year – Aaron Plessinger:
Back in 2016 we got a taste of Aaron Plessinger’s character when he broke out new dance moves whenever he won a round of the 250SX East championship. After a few years under the radar, AP7 and his exuberant personality returned to the fore in 2021. His infectious enthusiasm and smile radiated most when he took the podium at Daytona, Pala 1 and RedBud, but he’s quickly won a legion of fans with his all-American attitude. And who can forget that classic moment at RedBud where he grabbed an amazing holeshot and casually looked back at the rest of the field! Series of the Year – MXGP:
As good as the Monster Energy AMA Supercross and Lucas Oil Pro Motocross Championships were, the drama and bar-to-bar racing we witnessed in the MXGP this year was second-to-none. The battles between Jeffrey Herlings, Romain Febvre and Tim Gajser in particular were intense, entertaining and thoroughly unpredictable. The desperation levels between the three racers were so high, that after 16 of 18 championship rounds, just three points separated them. Jeffrey Herlings ultimately prevailed to take the championship, but 2021 will go down as one of the wildest, most entertaining MXGP championships of all time.

Most anticipated motocross model – 2022 Honda CRF250R:
While most manufacturers have chosen to tinker around the edges of their motocross range for 2022, Honda has completely redesigned its CRF250R with a host of changes to the engine and chassis. The overhauled motor produces more low-rpm torque without sacrificing usable top-end power, while the frame updates have trimmed down the weight, improved the bike’s ergonomics and enhanced its handling characteristics. Honda’s also reverted back to a single exhaust system and revamped the clutch and cooling systems. It’ll be in the capable hands of Jett and Hunter Lawrence come the new season, as well as Wilson Todd domestically!

Most Anticipated Enduro Model: 2022 Yamaha WR250F
Yamaha’s ever-popular WR250F is celebrating its 21st birthday with a sweeping list of upgrades for 2022. The engine sports a new cylinder head, larger intake port shape and a YZ250F-inspired exhaust camshaft profile. The chassis and engine mount placement have been updated to improve bump absorption, traction and cornering performance, while both the KYB fork and shock have been given new settings to match the frame. A stack of improvements to the brake calipers, pads, speed sensors, top triple clamp and front axle round out the changes.

Top Team – CDR Yamaha Monster Energy:
Craig Dack’s factory Yamaha program is a slick operation that is never content to rest on its laurels. They’re a hard-working outfit that expects nothing less than the best from its riders and those racers consistently deliver. In 2022 both Luke Clout and Hayden Mellross finished inside the top five in the shortened ProMX Championship, with the clear highlight being the guys placing first and second overall at the Canberra round. The CDR Yamaha Monster Energy team will have a slightly different look next year, with Aaron Tanti joining the team alongside Clout.

Best Event – The MXGP decider:
After an intense MXGP championship, four-time world champion Jeffrey Herlings (Red Bull KTM) and former world champion Romain Febvre (Monster Energy Kawasaki) entered the final GP at Mantova separated by just three points, with Febvre having the slight advantage. In the opening race Herlings muscled his way past his rival and take the win, tying the two on points heading into the final race of the season. Febvre got the better jump of the gate and quickly moved into the lead, but Herlings was having none of it, catching and passing Febvre at the midway point. The Dutchman then put fresh air between the two before a late moto mistake saw Febvre crash and finish third, handing Herlings his fifth world title.

Hottest Topic: Jett’s Lawrence’s nail-biter:
For the entirety of the Lucas Oil Pro Motocross Championship we clung onto the edges of our seats as Team Honda HRC’s Jett Lawrence tussled back-and-forth with Justin Cooper for the 250MX title. With one hand on the trophy heading into the final round at Hangtown, Lawrence crashed twice in the opening moto to finish eighth, while Cooper took the win. Another crash in the second moto saw him again have to desperately cut his way through the pack as Cooper again set sail out front. Jett managed to claw his way back to third, which was enough to clinch his first Pro Motocross championship by a mere six points. Greatest Disappointment – Domestic cancellations:
While the racing action flew thick and fast across the world, the Australian ProMX and AORC championships languished as the realities of covid-19 bit hard. Thankfully we were able to squeeze in enough ProMX rounds (three) to be able to crown champions in that series, but the AORC only managed to hold two rounds at Golden Beach, VIC, in April. Because that series didn’t hold the minimum championship requirements, no titles could be awarded. It’s been a tough, frustrating six months of restrictions and closed borders, but we’re hoping we’re through the worst of it and that racing will return to normal in 2022.

Most Surprising Moment – Webster near-perfect in MX2:
Although Honda Racing’s Kyle Webster entered the 2021 Pro MX MX2 championship as the hot favourite, few people tipped that he’d control the three-round championship the way he did. The Victoria-based Western Australian dominated five of the six races to convincingly claim the title. The only tarnish to Webster’s season came at Maitland, when he dropped the bike early on and scrambled his way to fourth on a track with limited passing opportunities. Despite that hiccup, the Honda pilot was on another level this year and will be one to watch when he steps up to MX1 in 2022.

Social Standout – Jett Lawrence:
When it comes to social media, marketing and attracting new eyes to the sport, no-one has done it better than 2021 Pro Motocross 250MX champion, Jett Lawrence. Not only does his social media provide a behind-the-scenes, honest glimpse into the life of a professional athlete, his #jettsonbanner competition for the outdoors and his Jettson OnlyFans day experience at the Pala finale were marketing genius. Jett’s new Flight Plan YouTube series also offers great insight into the lives of the Lawrence family. There’s a reason that this 18-year-old has fast become the fan favourite at every event he turns up to and always attracts the loudest cheers.

Special Mention – Antonio Cairoli:
2021 saw the retirement of one of motocross’ all-time greats, Antonio Cairoli, from professional racing. At 36, the legendary #222 amassed an incredible 94 GP overall victories – including two this year at Matterley Basin and Pietramurata – and nine world championships. As a tribute to his remarkable career, the FIM also retired the 222 plate from competition. The talent, work ethic and racing passion of the Scillian will be greatly missed in the paddock and he’ll leave a huge void in the sport.