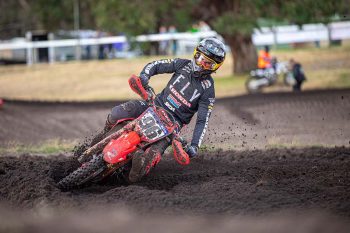 Honda Racing’s Kyle Webster marked his arrival on 450 machinery with dominance in the weekend’s AMX MX Open at Wonthaggi, taking all three moto victories to claim the overall, as Rhys Budd took victory in the Pro Lites.

In what was his first official outing since graduating from MX2, national champion Webster led every lap of the first two motos, before charging from third in the final outing to finish P1.

Aaron Tanti made an impressive debut at CDR Yamaha Monster Energy, a 2-2-3 scorecard and P2 overall evidence that he is coming to grips well with the new surrounds, as Honda-mounted Brett Metcalfe showed he has plenty left in the tank by finishing 3-3-4 to complete the overall podium.

Current ProMX MX1 champion Luke Clout (CDR Yamaha Monster Energy) finished the event in fourth, notching his best result in the final outing in P2 after leading up to half race distance, however, had his overall result limited by 10-5 finishes in the first two motos. Completing the top five, new Honda Racing signing Dean Ferris went 4-6-5 in his return to competition.

“Wow, what a weekend, the 2022 CRF450R is amazing, seriously amazing,” Webster stated. “I didn’t expect this. We got some new Showa suspension a week ago and bolted it in and it was great. The whole team lifted this last week, and everyone was excited to go racing. This is what our sport and team needed, it was great to be racing again.” 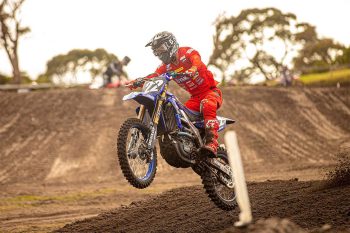 Yamalube Yamaha Racing’s Rhys Budd completed an impressive breakout season by winning the Pro Lites category, racing to a 1-1-2 scorecard over the weekend.

Preventing Budd from clean sweeping the class was Jai Constantinou, the Empire Kawasaki rider winning the last outing to finish the event second overall with 3-5-1 results, ahead of Liam Andrews (Honda), who rounded out the overall rostrum in P3.

“I am glad I made the trek from New South Wales. It was a great event and it was good to go racing again,” Budd explained.

In the Women’s category, Taylah McCutcheon dominated the event by winning all five motos to take first overall, ahead of Madison Brown and Madison Healey, P2 and P3 in the class respectively.

Additional winners at the AMX Pro MX were Hixson McInnes in Junior 250, Ky Woods in Junior 125, Luke Cartwright in 85 BW, Seth Thomas in the 85 SW and the 65cc categories, Mason Ezergailis in DIV 2 and Riley Findlay, who was victorious in the Two-stroke class.