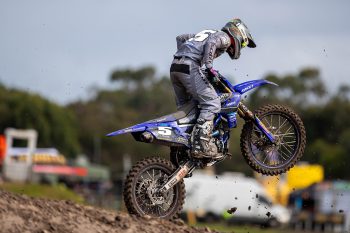 Emerging talents Alex Larwood and Rhys Budd have been announced as the Yamalube Yamaha Racing line-up for 2022, with Jay Wilson making an unexpected departure from the MX2 effort.

Budd experienced a breakout season in 2021 – his first ‘full’ year in MX2 and first with the team – storming to third in the Penrite ProMX Championship.

“As soon as I got the call from the team at the start of the 2021 season, I put my head down and got to work,” explained 20-year-old Budd.

“Now that the pressure of preparing bikes and arranging things was taken from me, I was able to dedicate more time to my riding and training and it paid off with some good results and a new deal for this year, which I’m stoked about.

“The team have been amazing for me and it’s good to know you have a bunch of people who believe in you and want to help you achieve your goals. We already have a great base to start from as well as some additional plans that will only see me improve.

“I was pumped to stay with the Yamalube team again for 2022 and I really want to reward them for taking me on this year when they didn’t have to and no one else would.”

Joining Budd, 18-year-old Larwood achieved a podium in the first outing of 2021 at Wonthaggi in second overall, however, multiple injuries impacted the rest of his season.

Back to full fitness, Larwood – a product of the Yamaha Junior Racing program – moves across in 2022 from the WBR Yamaha team, gaining increased support in line with his potential displayed and results delivered.

“I have been with Yamaha for a long time now and for them to continue to support me through the years is important to me,” Larwood commented. “They picked me up back in 2014 as a junior, moved to the WBR Yamaha team when I turned 16 and now the support increases in 2022 via Yamalube Yamaha.

“No other manufacturer can offer support like that over a long period of time. In just the short time I have had to deal with them, I can see the professionalism in the team and how they go about their jobs. Their bikes always look amazing and they have had plenty of success in the past.

“We have three months to be ready for round one and it’s time to get to work. The team have my back, racing is back to normal, and we are looking good for a full and exciting season next year. I can’t wait.”

The future of Wilson is unclear, thought to be remaining aligned with Yamaha, today’s release stating to ‘standby for a further announcement regarding Jay Wilson in the coming weeks’. He recently completed a one-off race in Japan with victory at Sugo, however, it’s uncertain if that has any relation to this decision.