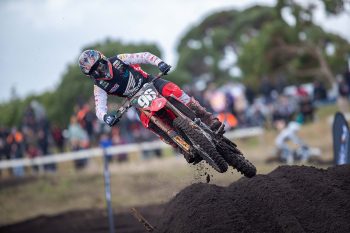 The AMX MX Open continues to take shape for Wonthaggi on 11-12 December, building to be a thrilling end of year spectacle with a large selection of leading talent confirmed and equal prize money on offer for men and women riders.

The $20,000-plus of prizes on offer will be split between the top categories and, in a first for women’s motocross in Australia, the event will pay the same between the Senior Women, Pro Open and Pro Lite classes.

Honda Racing has confirmed the entry of Emma Milesevic, while current Queensland Women’s champion Taylah McCutcheon will take to the gate alongside some of the top domestic female talent.

“It’s been a long time coming and I am proud of everyone’s efforts,” Milesevic stated. “I want to thank the organisers, the sponsors and the Bass Coast Shire. I know how much effort the women riders put into their racing and to be recognised like this is amazing.”

In addition to Honda Racing’s returning Dean Ferris and graduating MX2 champion Kyle Webster, Brett Metcalfe is also confirmed for the event. The rivalry between CDR Yamaha and Honda Racing gets a chance to reignite in 2021 at the AMX MX Open – the changes in the rider market to provide an interesting dynamic.

“Off the track we get on well, but once the gate drops there are no friendships, we want to beat Yamaha and their riders as well as Kawasaki and their riders and everyone else who is racing,” explained Honda Racing team owner Yarrive Konsky.

CDR Yamaha Monster Energy Team owner Craig Dack added: “The pandemic disrupted our championship and we haven’t raced a lot over the past two years because of it. This race is more about pride than prize money. The riders will be racing hard against each other and I am expecting some intense battles.”

Empire Kawasaki is also confirmed for the event, with former Japanese champion Haruki Yokoyama to compete on a factory-backed KX250 in MX2.

In addition to the prize money and other exciting prizes, the winner of the Pro Open and Women’s classes will take home a Tempur mattress and pillow set, valued at $12,000.

Over 200 entries are expected across the categories at the AMX MX Open and there will be trade stands on display, with spectators encouraged to book tickets online. Visit www.mxopen.com.au for more information about the event.