At 20 years of age, Rhys Budd is one of the country’s top emerging talents after a breakout season in Penrite ProMX, riding his Yamalube Yamaha to third in the MX2 championship ahead of some seasoned contenders. MotoOnline caught up with Budd to discuss Five Questions surrounding a strong year, navigating the lack of racing and his focus heading into 2022. How would rate the 2021 season for you personally, finishing third overall in MX2 and frequently taking it to some pretty seasoned campaigners?

I think it’s been one of my best – I’d been getting better and stronger as the year went on. It was unfortunate that’s the way the year ended, but I put myself in the right position and it’s the best season I’ve had so far. Hopefully next year we can get in a full series and I can show my full potential there again.

What was the ride or moto that stood out to you as your best?

I think moto one in Maitland was probably my best one and I had my best finish there, which was second place. I think I started just inside the top five and I had to make a couple of moves. I was up into third, me and Jay [Wilson] – I think I had Jesse [Dobson] behind me – were battling for pretty much the whole entire moto, I feel that I was able to put that little bit of pressure on Jay on the final lap and he put it down with a quarter of a lap to go and that helped me move up into second. That was probably my best moto, I started strong and I finished strong, that’s what we work for.

Is there an added sense of pressure off the back of your results heading into next year?

No, I don’t think there is any pressure there – I think it is just a big boost of confidence. I was super-nervous coming into round one, wasn’t sure where I was going to be at and what I needed to work on, but my off-season, pre-season program was super good and we were heading in the right direction and I feel like I just got better and stronger as those couple of rounds went on. I don’t think there is any added pressure, just a big boost of confidence. 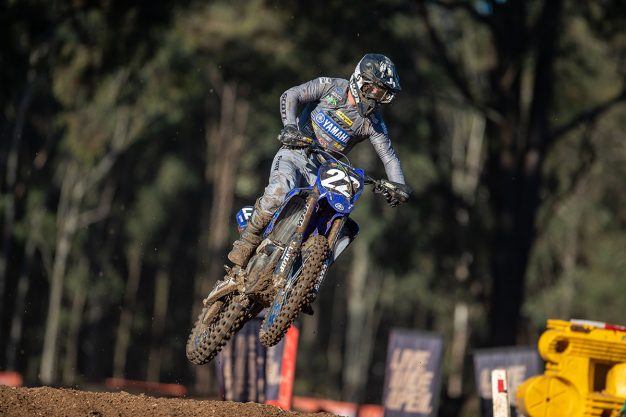 I think being able to have a little bit more fun and just enjoy life that little bit more. I think that’s what I really did, took a little bit of time away from riding and just focus on myself and stuff I enjoy doing, sometimes you don’t have the time to do that when you are in a full race season. I think just really enjoying life and working on the things I need to work on. Obviously, it’s not ideal to have that break, but it was a good time to do some things I would not be able to do in a full season and have some fun really.

Can you see anything specific you need to do over the off-season to give yourself the ingredients you need to fight for the championship?

I’m going to base myself in Queensland, going to invest in myself and get myself a riding coach and just really work on those little things that I need to work on. I haven’t had that opportunity before to work with a riding coach, to have that little bit extra for me is going to be a big help and another confidence-booster. I’m super-excited to do that and work on all my weaknesses and come out swinging for the first race.