Decision made to focus on complete series from late next year. 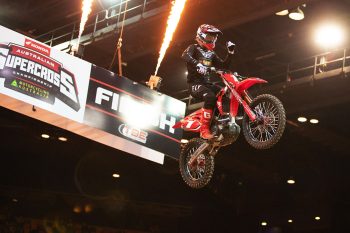 Planning for a delayed Australian Supercross Championship to be contested early next year have been benched, instead due to return when the actual 2022 series takes place in the latter stages.

AUS Supercross hasn’t run since 2019 after the cancellation of both the 2020 and 2021 seasons, citing complications with border restrictions and evolving stadium requirements for the latest pause.

Despite series commercial rights-holder AUS SX Holdings working to fit the initially-postponed 2021 series in January-February 2022, it’s understood that influential stakeholders within the industry ultimately weren’t in favour of a condensed championship prior to ProMX commencing.

The challenge of contesting a three-round Supercross series to begin the year, followed by eight rounds of the outdoors that will commence towards the end of March and then a complete AUS Supercross season at the end of the year would prove too extensive for the domestic teams and supporting brands.

With Monster Energy AMA Supercross also opening on its traditional January date, American riders would have been effectively ruled out including defending champions Justin Brayton (SX1) and Chris Blose (SX2). Multiple current local factory riders are on motocross-only contracts, adding to the challenge in filling those seats.

“Like all live sport and entertainment events, the last two years have been an incredibly challenging period for Supercross,” said AUS SX Holdings director Adam Bailey, who is also behind the annual international AUS-X Open event.

“After the record-breaking end to 2019 with 35,000 fans at Marvel Stadium for the AUS-X Open, we are itching to get back to racing and build on this success/swell of interest in the sport.

“The heartbreaking decision was made after discussions with key stakeholders including sponsors, government partners, racing teams and Motorcycling Australia – our priority is ensuring we have a successful and prosperous return to racing and will now do this in 2022.”

No information has been announced on the schedule or structure of the 2022 Australian Supercross Championship, expected to be released in the new year.

“We have always had the dream for the Australian Supercross Championship event to be one of the best in the world,” added Bailey.

“We’re committed to ensuring when we do return, we do so at 110 percent, which is hopefully in a post-pandemic world without any restrictions. There are big plans for the future of AUS SX that we can’t wait to share when the time is right.”