Australian prospect out of fuel on final stage as Walkner takes victory. 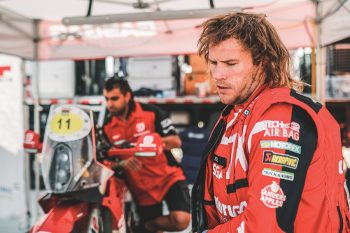 Daniel Sanders’ challenge for victory was brought to a heartbreaking halt in stage five of the 2021 Abu Dhabi Desert Challenge, running out of fuel as Matthias Walkner emerged victorious in the event.

GasGas Factory Racing rider Sanders entered the final stage P4, within four minutes of the leader and just 48 seconds from the podium off the back of a strong four days and claiming victory in stage three.

With all riders having to manage their fuel during the final special stage – which didn’t include a refuelling zone – the Australian’s pace was electric, topping each of the time splits until his tank was empty, ultimately displaying a never say die attitude to push his RC 450F to the finish in 14th overall.

“The last day has obviously been a huge disappointment for me and the team, but that’s racing – I guess you have to take the smooth with the rough,” Sanders explained.

“I started really well and was making good time through the dunes at the beginning of the stage. I realized about halfway through that with no refuelling in the stage, and the type of terrain we were racing through, fuel was going to be a problem.”

“So I tried to ease my pace as much as I could. Unfortunately, it wasn’t enough, and I eventually ran out. Obviously, it’s not the best way to end the rally, especially after such a strong year but I’m pleased with how I’ve ridden, not just in Abu Dhabi, but over the whole season.

“My pace here has been really strong, I won a stage and did a good job of leading out after that. Again, it’s not the way I wanted to end the season, but as it’s just my first full year in the championship, I’m definitely pleased with how I’ve progressed and raised my level.”

“Although the result here has knocked me back a little, I’ll just take the positives and look ahead to the Dakar in January,” he added. “I’ve really gelled with the bike – my navigation is always improving, and my pace is definitely there. We’ve got less than two months till Dakar, and I’m going to be ready!”

Red Bull KTM Factory Racing’s Walkner made it a great end to his championship-winning season, taking victory at the season concluding event in Abu Dhabi. Riders and teams now look ahead to the 2022 Dakar Rally, set to commence on 2 January.