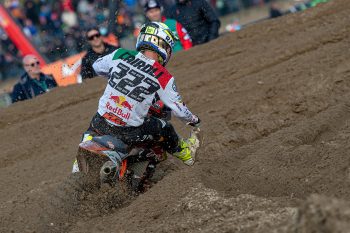 Crossing the line in moto two at Mantova Tony Cairoli’s outstanding MXGP career drew to a close, the nine-time world champion stating his success is ‘still hard to believe’.

Cairoli, 36, spent the last 12 years of his career KTM mounted, taking the premier class crown on six occasions for the Austrian manufacturer.

The Italian prior had a six-year stint on Yamaha machinery, winning his maiden premier class title in 2009 after claiming the MX2 title twice – 2005 and 2007.

With the 169 world championship race victories to his name, the GP legend experienced a difficult final outing in Mantova, a crash and subsequent broken gear shifter in moto one resulted in a DNF, followed by P10 in moto two which saw him land 15th overall for the round.

Cairoli remained competitive right until the end of his career, keeping in the 2021 title fight until the halfway point of the series and winning most recently the MXGP of Pietramurata and the 2021 MXoN with Team Italy.

“It’s amazing how my career has been,” Cairoli explained. “It’s still hard to believe I was nine times world champion.

“After so many years I still love to ride and I get so disappointed when I cannot make it, like today and the bad luck out there, I couldn’t make the podium today like I wanted but, overall, it’s been a good season. I was in the fight for the title up until halfway through the year and I think it was one of the nicest championships ever. I was sad I could not join the battle. Congratulations to all of them for making an amazing series.

“Thanks to all the people who have been involved in my ‘trip’ and all the fans.”