Final round sweep for Herlings to clinch MXGP crown Jeffrey Herlings has been crowned the 2021 MXGP world champion following a final round thriller at Mantova, as Jago Geerts made it two in a row to claim the overall victory in MX2.

Red Bull KTM-mounted Herlings won the opening moto ahead of Monster Energy Kawasaki’s Romain Febvre, the Dutchman slicing his way past the French rider to draw level on points.

A subsequent victory in the second moto saw ‘The Bullet’ seal the crown for a second time and the round win, as a spirited challenge by Febvre ultimately saw him finish the race third after a crash and land third overall for the final round behind Tim Gajser (Team HRC), who took the runner up position courtesy of a 3-2 scorecard.

Italian Tony Cairoli endured a challenging final round of his illustrious career, the MXGP legend 15th overall after a zero points haul in moto one followed by a 10th in moto two.

After 18 rounds, the MXGP gold plate went to Herlings on 708 points, five ahead of Febvre in second on 703 and Gajser third on 688. 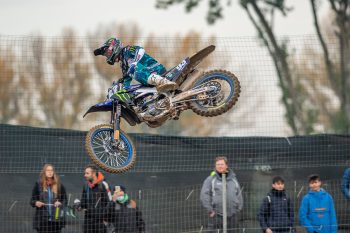 Teammate and new world champion Maxime Renaux ended the year strong with a victory in the second moto, however, third in the first outing meant second overall was the best he could manage.

Rockstar Energy Husqvarna’s Kay De Wolf had a solid end to his rookie MX2 season, third overall thanks to a second in the first race followed by a sixth in the second moto.

Australian’s Jed Beaton (Rockstar Energy Husqvarna) and Wilson Todd (Bike IT MTX Kawasaki) both competed in their final MX2 outing, Beaton landing P7 overall with a 7-8 scorecard, Todd P17 with a 10th in the opening racing before being unable to score in the second outing.

As crowned with two rounds to spare, Renaux ended the season on top with 734 points, Geerts was second on 610 ahead of Tom Vialle (Red Bull KTM Factory Racing) in third on 570. Guadagnini was able to jump Beaton to finish the year fourth, the Australian completing the top five. 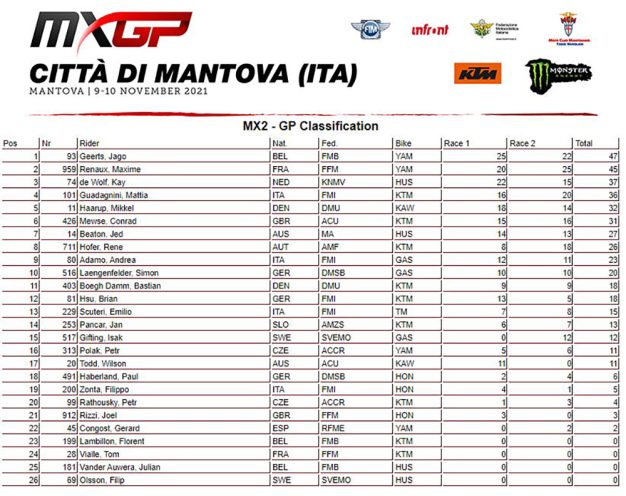