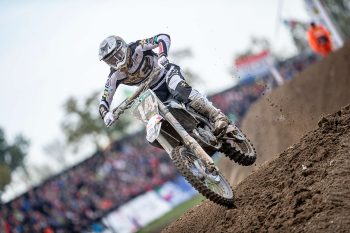 Jed Beaton endured a challenging final round in MX2 and with Husqvarna, however, finished his final year in the category fifth in the championship at the conclusion of Mantova’s round 18.

Mediocre starts in each moto hampered Beaton’s podium charge, bouncing back from a crash in race one to P7 before finishing eighth in the second moto, seventh overall for the round.

A difficult end to 2021 does not completely represent the Rockstar Energy Husqvarna rider’s season, the Australian able to land multiple podiums, his strongest round being the MXGP of The Netherlands finishing second overall with a 2-3 scorecard.

The season’s end draws the curtains on a three-year partnership between Beaton and Husqvarna, the 23-year-old now aged out of the MX2 category and needing to secure an MXGP ride to stay in the world championship.

“It’s been a pretty emotional day, to say the least,” Beaton explained. “As I’ve now aged out of MX2 it was my last race for the team which, after three great years, is really tough.

“It’s safe to say that the season didn’t end how I’d have liked due to a few issues and a crash in race one. That ruled me out of a chance of finishing on the podium but I really tried hard in moto two but it just wasn’t meant to be.

“I’ve had an incredible three seasons with Rasmus and the Rockstar Energy Husqvarna team and they’ve taken me under their wing and really shaped who I am today.

“I’m disappointed to not end our time together with a podium result but I gave it my best shot and finishing fifth in the series is a pretty decent result.”