Clout, Ferris and Webster to race at December event. 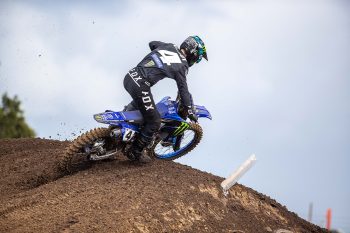 An all-star line-up has been confirmed for the 2021 AMX MX Open to be held at Wonthaggi next month, including ProMX champion Luke Clout alongside current MX2 champion Kyle Webster, and the returning Dean Ferris.

Scheduled for 11-12 December, the event is set to attract some of the biggest names in domestic motocross racing with an attractive prize pool of over $20,000 on offer.

More importantly, it provides riders and teams with the opportunity to take to the track for a final time in 2021 after a severely disrupted season in line with the state border restrictions.

“I didn’t know if we would be racing until March next year, so this is great for our sport and for riders and fans,” explained CDR Yamaha Monster Energy rider Clout. “The prize money is a bonus, but honestly, all we have wanted all year is to just go racing.”

With the return of Ferris – freshly minted in Honda Racing colours – and Webster making the transition to the 450 class in red, the event will provide an interesting spectacle to see how riders and teams will stack up after the extended break, with the likes of Brett Metcalfe and Aaron Tanti also confirmed.

The AMX MX open will cater for a wide range of classes, including junior and women’s categories, with an additional $10,000 in prizes available.

“Yamaha and Honda have got involved along with many industry leaders,” stated Yarrive Konsky, who is behind the AMX MX Open. “The event’s naming rights partner – AMX (All Motorcycle Accessories) has increased their support for this year and collectively they have made the $20,000 prize money possible. The Bass Coast Shire has also supported the event, along with Motorcycling Victoria, who have halved their one-day licence fees to ensure participation resumes following two difficult years.”