Transition made official ahead of the 2022 edition this January. 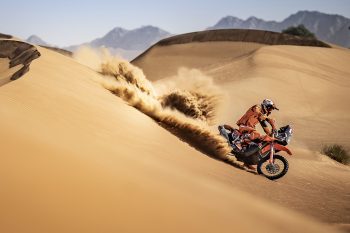 KTM Factory Racing has officially announced that MotoGP race winner Danilo Petrucci will switch his focus to Dakar for 2022, attempting the notorious rally in January.

Petrucci wasn’t re-signed by KTM in MotoGP for next season, but instead will field his current Tech3 KTM Factory Racing colours on-board the works KTM 450 Rally.

With two wins and a total of 10 podiums in his MotoGP career, 31-year-old Petrucci maintains a lifelong dream of contesting the Dakar Rally, which KTM Motorsports director Pit Beirer will assist him in achieving. He has already completed a shakedown in Dubai prior to this weekend’s MotoGP finals at Valencia.

“For me it is really a dream come true to race the Dakar,” Petrucci explained. “It’s an event I’ve always wanted to do since I was a child when I was watching video tapes of the Dakar Rally from the ’80s and ’90s. Now, thanks to KTM, this dream is coming true.

“First, I would like to thank KTM for this great opportunity – I think I will be the only rider that in just over one month has competed in MotoGP and then the Dakar Rally, so it is with great pride that I go there. My main target is just to finish the race and enjoy it.

“The first approach was to have some road book training with [KTM rally manager] Jordi Viladoms, he competed in the race many times and finished on the podium, so he has been great in helping me learn this special art.

“I had my first taste of riding the KTM 450 Rally recently at an initial test in the Dubai dunes, where I was with KTM’s Dakar champions and I was able to learn so much from them – they were super-nice and helpful to me. I hope the training for the next month will be enough. For sure, it will be a tough race, but I am excited.”

Beirer added: “Danilo’s talent and his character means he is one of the few elite level guys that we believe can make this radical move from the asphalt to the dunes.

“It’s a great story for a great guy. We want to thank him for his professionalism and all his efforts as part of the Tech3 team in our MotoGP project and now it’s time for another ‘world’!”

Following the MotoGP season, Petrucci’s attention will be fully-focused on furthering his riding and navigational education ahead of his first attempt at the 14-day and approximately 8000-kilometre event, which begins on 1 January.

The 2022 edition of the competition will take place in the Middle East for the third year in a row and will allow Petrucci to be thrown into the depths of Dakar to learn and develop with an eye on 2022 FIM competition and a potential future in the sport.