Honda Racing continues to back teenager in next step of career. 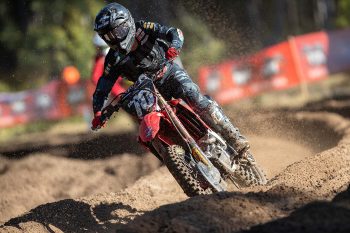 Teenage talent Ben Novak will graduate to MX2 with Honda Racing in 2022, following the recovery process from a third open-heart surgery and off the back of a promising MX3 campaign this season.

The New South Welshman has been Honda-mounted for the last five years, most recently achieving fourth overall in the covid-condensed 2021 ProMX MX3 championship, highlighted by finishing second at Canberra.

However, a rare heart condition – Tetralogy of Fallot – has hampered Novak’s career with symptoms including shortness of breath and difficulties while exercising. Such implications have streamlined the decision for the Honda rider to undergo surgery ahead of the 2022 season.

“It’s been tough, my health has never been 100 percent, I suffer from something called Tetralogy of the Fallot and we always knew there would come a time for me to have another surgery,” Novak explained. “As I have gotten older it’s been harder to perform at my best and racing in MX2 next year requires me to be stronger and fitter than ever before.”

“I will never complain about it, but it’s been harder on the bigger bikes and in longer races, especially in the heat. I worked around it for so long, but I noticed it more this year and my parents and I thought it was best to get the surgery ahead of next year.

“I am confident this will help improve my stamina, my muscle recovery and growth. It’s been a hard two years for everyone in racing and this wasn’t an easy decision, but we felt it was the right one. I really appreciate Honda sticking by me.”

Novak’s determination and results while pushing through the condition have gained the respect of Honda Racing team owner Yarrive Konsky, who sees the potential moving forwards.

“We haven’t seen the best of Ben – he has achieved great results for Honda and we will standby him through his recovery,” Konsky explained. “He proved to me that he has the will to push hard and his commitment is unquestionable. We have realistically set goals for Ben next year in his first season in MX2 and we will continue to work with him to achieve them.”

Honda Racing is expected to continue to make announcements surrounding its team in the coming weeks, already signing Kyle Webster for MX1 alongside the returning Dean Ferris. A replacement for national MX2 champion Webster on the new CRF250R is yet to be confirmed.