Fernandez steps up with HRC in final MXGP rounds

Factory Honda team has card up its sleeve in tight MXGP title contest. 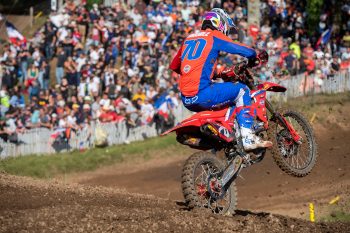 Team Honda 114 Motorsports MX2 regular Ruben Fernandez will make the transition to MXGP for the final two rounds of the 2021 series, Team HRC calling him in the assist Tim Gajser in defending his crown.

Fernandez’s graduation to the premier class comes off the back of a successful triple-header at Pietramurata, landing on the overall podium at each event.

The in-form Spaniard could be a valuable asset to help Gajser secure the tightly-contested MXGP title, however, he’s outlined a modest approach in his transition to the factory CRF450R machinery.

“I’m extremely excited for this opportunity to ride the CRF450R for these final two rounds,” Fernandez explained. “It is a great chance for me to just go out and enjoy myself at two races without too much pressure on my results.

“It is a very tough class right now, but I just want to ride well in four motos and show people that I am capable of riding the Honda CRF450R as well as I’ve been riding the CRF250R recently.”

“It’s been two years since I’ve ridden a 450 and I will only have a few days of preparation and testing, but I will do my best. It would have been great to have had more seat-time to get ready, however, these past three rounds in Trentino have given me a lot of confidence and I can’t wait to get to Mantova next weekend.”

With Team Honda HRC MXGP regular Mitch Evans forced out of the 2021 championship due to an ongoing left wrist injury, the MXGP of Lombardia will mark the first time the factory Honda squad will have a two-rider MXGP line-up this season.

KTM have a three-rider factory squad – Cairoli already demonstrating he is willing to play the team game – and Monster Energy Kawasaki is down to just one MXGP rider – red plate holder Febvre – after Ivo Monticelli was sidelined from a shoulder injury. The addition of Fernandez at HRC will certainly add an interesting dynamic to the title race.

Just three points separate the top three in the MXGP standings, Febvre 614, Gajser 613 and Jeffrey Herlings 611, as the championship heads into the final four races of the year. Round 17 is this weekend at Mantova – the first event of the season-concluding double-header at the venue.