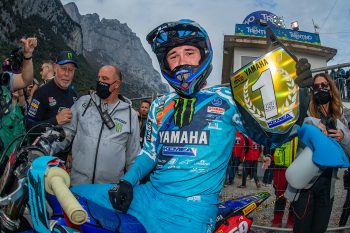 A commanding performance by Maxime Renaux saw him crowned MX2 world champion on Sunday, while overcoming a season of illness, Jeremy Seewer returned to the top step at the MXGP of Garda.

Seewer held on to claim the first moto victory after a mid-race fall, before a second in moto two was enough to see the Monster Energy Yamaha Factory MXGP rider take the overall.

The championship battling trio left it all on the line behind Seewer. Romain Febvre (Monster Energy Kawasaki) was second in moto one after remounting from a heavy fall on the last lap. Jeffrey Herlings (Red Bull KTM Factory Racing) got the better of Tim Gasjer (Team Honda HRC) on lap 10 before ultimately finishing third, Gasjer fourth.

In moto two Gasjer put on a strong performance to win the race and finish second overall. Critically, third in the second moto and third overall saw Febvre reclaim the red plate from the Herlings after the Dutchman recovered from two crashes to cross the line in fourth, placing him fourth overall for the round.

With just two rounds remaining Febvre leads the title race on 614 points, just one point ahead of Gajser on 613 who also jumped Herlings in the standings, now in hot pursuit with 611 points. 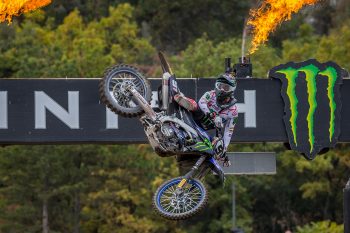 Renaux went to 2-1 to comfortably win the day, ahead of Tom Vialle (Red Bull KTM Factory Racing) who was second overall, courtesy of 4-2 results. Ruben Fernandez (Team Honda 114 Motorsports) completed the podium with a pair of thirds.

Rene Hofer (Red Bull KTM Factory Racing) won the opening moto, however, a crash and subsequent P8 finish in the second race meant fourth overall was the best he could manage.

Bike It MTX Kawasaki’s Wilson Todd achieved a season-best fifth overall, finishing the opening race in seventh before finishing within striking distance of the podium in race two, crossing the line fourth.

Notably, the second-placed rider in the championship Jago Geerts (Monster Energy Yamaha Factory MX2) had a disastrous round, 13th in the opening moto before failing to finish the second race.

Of other Australians competing at round 16, Jed Beaton (Rockstar Energy Husqvarna) finished a fifth in race one before a difficult moto two finishing P14 left the FC 250 rider ninth overall.

The MXGP World Championship resumes this weekend on 7 November at Mantova, Italy, marking the penultimate round of the series. 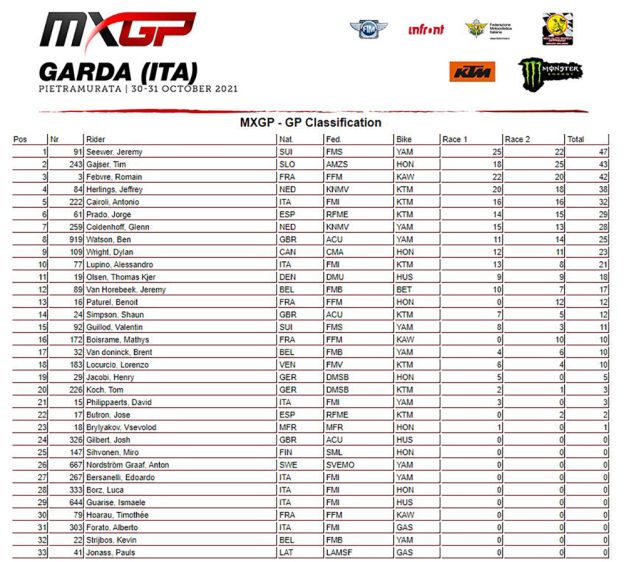 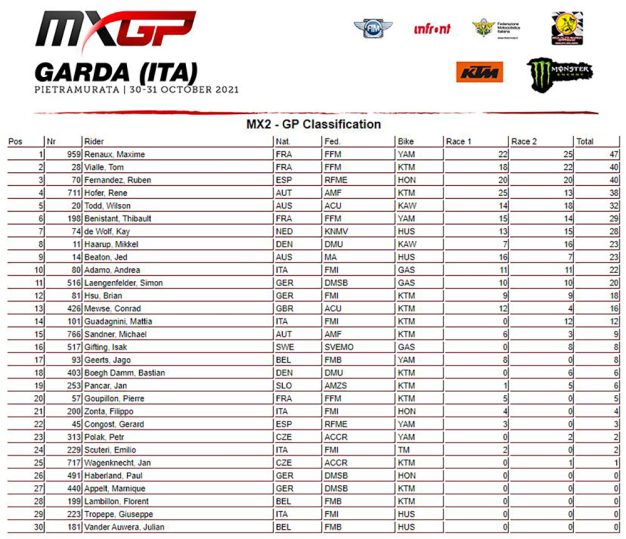