Top 10: Races of the ProMX season

Reliving some of the key races and battles from a revitalised 2021 series.

With the short-lived 2021 Penrite ProMX Championship now officially wrapped up, MotoOnline takes a look back at the Top 10 races from an entertaining three-round series. 1. Luke Clout last-gasp title victory:
Having dropped 22 points at the opening round due a mechanical DNF, CDR Yamaha Monster Energy Team’s Luke Clout had his back against the wall, but didn’t let the pressure get to him. After bouncing back to a round win at Canberra, Clout still found himself 15 points behind red plate-holder Regan Duffy heading into the third round at Maitland. Clout tore to victories in the opening race and the first of the back-to-back motos, before finishing second to Kirk Gibbs (Honda Racing) in the third and final outing. With Duffy struggling to come to terms with the technical Maitland circuit and finishing off the podium, Clout overtook the points lead with that final race, clinching the shortened championship by a mere three markers.

2. Regan Duffy wins on MX1 debut:
Generally speaking, it takes a rookie a year or so to find their feet in the premier class, more if they’re jumping up directly from the MXD field. KTM Racing Team’s Regan Duffy is an exception to the rule. Having loads of experience tearing up the WA sand and with Wonthaggi as his base training facility, Duffy entered the opening round quietly confident of his form and pace. He wasn’t quiet for long as he topped the Thor MX1 qualifying sheets, won the Top 10 Shootout, then finished third in the opening moto. The best was yet to come in the final race as he quickly sliced through the pack from an average start to take the lead from Hayden Mellross (CDR Yamaha Monster Energy Team) on the third lap. From there he was never headed as he stretched out his lead to 17 seconds at one stage, and lapped up to ninth place. As far as rookie debuts go, Duffy’s performance at Wonthaggi was near perfect and we wish him the best in his recovery.

3. Nathan Crawford halts dominance:
Serco Yamaha’s Nathan Crawford had experienced a frustrating season leading into what would become the final race of the 2021 championship. Dogged by mishaps and mechanical DNFs, the former international struggled to show he was a genuine title threat. The misery continued at Maitland with a sparkplug issue early in the opening Pirelli MX2 race costing him another potential 25 points. Crawford came into the second race with an angry fire in his belly, grabbed the holeshot, then fended off a spirited challenge from Yamalube Yamaha’s Jay Wilson. As Kyle Webster (Honda Racing) desperately tried to recover from a big mistake in the opening laps that saw him drop as low as 15th, Crawford punched out perfect laps to take a redemptive win. As it would turn out, he’ll go down in the books as the only rider to take a race win from 2021 MX2 champion Webster.

4. Alex Larwood’s dream start:
WBR Yamaha Bulk Nutrients Racing’s Alex Larwood came into the 2021 championship as an unknown, seeing as he’d only stepped out of the junior ranks in 2019 (and 2020’s race season was a write-off). It took no time for the 17-year-old to find his feet, as he jumped to the front of the opening Pirelli MX2 race at Wonthaggi, and led a hungry pack of racers through the opening two laps. It was only a brilliant pass by his training partner, Honda Racing’s Webster, on the third lap that saw him surrender the lead. Larwood didn’t let the pass or the torrential downpours faze him, as he hung onto Webster’s tail, eventually finishing an impressive second place, just six seconds behind the Honda rider. Even more impressive was the gap – 41 seconds – that the pair had stretched over third-place finisher Rhys Budd (Yamalube Yamaha).

5. Kirk Gibbs and Luke Clout clash:
Kirk Gibbs and Clout have had their fair share of on-track battles over the years, but things really ratcheted up between the two at the second back-to-back Thor MX1 race at Canberra. Honda Racing’s Gibbs enjoyed a great jump off the gate, leading Clout and Duffy into the first turn. Clout stalked Gibbs for a handful of laps before making a committed pass for the lead. But Gibbs was having none of it and refused to give up. A lap later the two rivals traded plastic and elbows as their lines came together in a corner. Clout was shunted off the track, allowing Gibbs to again take the lead, and from there he wasn’t challenged as he took his first race win of the season.

6. Brett Metcalfe returns to the winner’s circle:
Honda Racing’s Brett Metcalfe might be the oldest racer in the MX1 class, but the 37-year-old veteran proved he’s still got plenty of pace by winning the first Thor MX1 moto of the championship at Wonthaggi. After rounding the first turn breathing down Clout’s neck, Metcalfe called on his experience and patience as the Yamaha racer went out too hard, too fast in the first half of the race. As Clout began to fade, possibly with a bike issue, Metty found an extra gear and methodically sliced chunks off his 10-second lead. With four laps to go, the South Australian made a decisive pass on Clout to take a memorable win – his first since 2016 – and start his 2021 campaign in the perfect footing. A fifth place result in the second moto proved to be enough to claim second overall on the day. 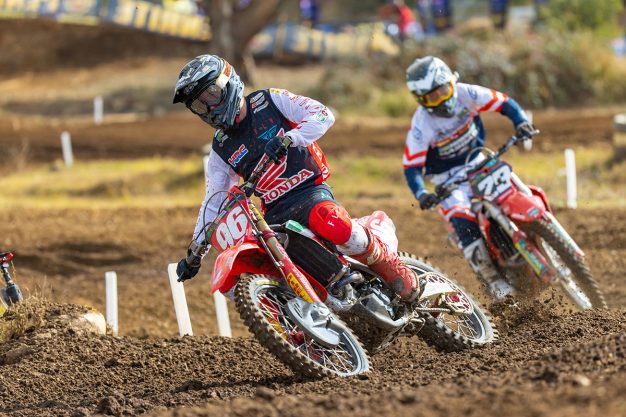 7. Kyle Webster caps off the perfect weekend:
Honda Racing’s Webster entered the 2021 race season as the hot favourite in MX2 and he quickly set about living up to the heavy expectations placed on his shoulders. While home-ground advantage played a role at Wonthaggi, Webster got better as the day progressed. After qualifying fastest, then taking the win in the opening MX2 race, the Honda pilot hit his straps in the final race and sent alarm bells ringing across the pits. As the technical track and weather deteriorated, Webster snatched the holeshot and never looked back. Even a tip-over on the fifth lap wasn’t an issue, as he had enough time to remount and continue tormenting the field. By the time the chequered flag fell, he’d rebuilt a 12-second lead over Serco Yamaha’s Crawford and lapped up to ninth place.

8. Yamalube Yamaha teammates battle at Canberra:
It’s always fascinating to watch the on-track tensions between teammates and the battle between established Yamalube Yamaha racer Jay Wilson and the team’s freshman, Rhys Budd at Canberra was no exception. After Wilson bounced back from a dismal Wonthaggi opener to finish runner-up in the first MX2 moto in the ACT sunshine, Wilson and Budd started the second moto in fifth and sixth respectively, setting the scene for a fascinating battle. The pair began dicing back and forth, allowing Alex Larwood to enter the fray momentarily, before the WBR Yamaha rider crashed out. With 10 minutes left it looked like the battle was run done as Wilson slowly edged out a two-second buffer, but Budd had other ideas. With four laps remaining, Budd again turned up the heat, catching and passing a tiring Wilson and taking over fourth place. At the end of the championship just two points separated the pair, with Budd in third and Wilson fourth.

9. Kirk Gibbs goes wire-to-wire:
While Clout captured the headlines at Maitland with his last-gasp Thor MX1 championship performance, Gibbs accomplished a feat of his own, when he became the first rider to successfully stop Clout from leading any laps of a race in 2021. In the second of the back-to-back motos, Gibbs grabbed the holeshot and held that position for all nine laps, despite constant pressure from Clout. The gap between the two was never more than two seconds, with Clout staging multiple attacks on his rival, but Gibbs was able to counter and parry each of them and end the 2021 championship on a high note.

10. Todd Waters versus Regan Duffy at Maitland:
When a defending champion and a new red plate-holder find each other on the track, it tends to draw attention. The battle between Husqvarna Racing Team’s 2019 MX1 champion, Todd Waters, and KTM Racing Team’s (then) series leader Duffy in the opening Thor MX1 moto at Maitland was a perfect storm. As Clout dispatched of Gibbs up front, Duffy frantically tried to recover from an average start, finding his way onto the rear wheel of Waters on the fifth lap. A spirited battle ensued for several laps, which saw them close the gap on third-placed Aaron Tanti (GasGas Racing Team). Using his racecraft and experience, Waters made the most of the opportunity and jumped into third, while it took Duffy another lap to find his way past Tanti. By that stage, Waters had pulled a three-second gap and held third to the finishline, with Duffy seven seconds in arrears.