Signing of Ferris made official by Honda in 2022 comeback

Three-time Australian MX1 champion back for another season. 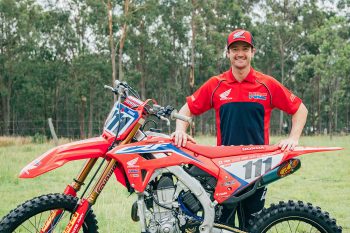 Honda Racing has made the comeback of Dean Ferris official after signing him for the 2022 Penrite ProMX Championship, marking the three-time MX1 champion’s return to the sport.

Ferris announced his retirement at the start of this year after injuring his back last August, however, the 31-year-old has backflipped on that decision in a move hinted at last week.

“I am excited for what is to come with Honda,” Ferris commented. “While healing from my back injury, I wasn’t sure what my racing future looked like, so I made the call to retire as I thought it best at the time for myself and my family.

“Since then, the break has allowed me the freedom to ride again without any pressure, which got me back to the basics of why I love to ride. I’ve spent a lot of time reflecting and realised that I still have the desire to race competitively in Australia.”

The return of Ferris, who won the premier class title in 2016, 2017 and 2018 with CDR Yamaha Monster Energy, will see him target CDR’s latest newly-crowned champion Luke Clout, who captured the 2021 crown. Most recently Ferris has been aboard KTMs.

Ferris formed part of the Yarrive Konsky-led Honda Racing program in 2008 and 2009 with modest results at that point of his career, before finishing third in the 2010 MX1 championship standings as a privateer aboard CRF machinery.

“It’s been a minute since I’ve raced for Honda,” he added. “Back when I was last riding for them it was actually their first full season as Honda’s factory program, so I can see they have come a long way since then. Yarrive is dedicated to the sport and to Honda, so I feel it’s going to be a prosperous partnership.”

Ferris will line-up alongside new MX2 national champion Kyle Webster in 2022 as the latter steps up to the CRF450R, indicating the departure of both Kirk Gibbs and Brett Metcalfe from the factory team. It’s rumoured that Wilson Todd is in line to take the place of Webster in MX2.