No 2022 plans confirmed for motivated Metcalfe

South Australian reaffirms desire to race-on in both series next year. 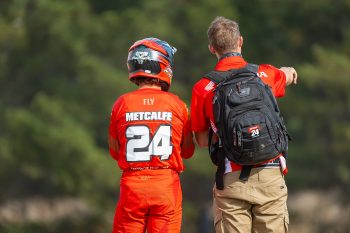 Brett Metcalfe has again signalled his motivation to race-on in 2022, following Honda Racing’s MX1 signing of Kyle Webster and the impending return of Dean Ferris in red.

Metcalfe, 37, has raced for the squad since 2018, with his most recent victory coming in moto one at Wonthaggi, the 2021 Penrite ProMX season-opener.

The South Australian boasts over a decade of overseas experience in both Europe and the US, along with a multitude of national motocross/supercross victories and podium finishes.

With both 450 seats at his current homestay Honda Racing all but officially filled for 2022, Metcalfe is effectively left without a ride heading into next season, but says he remains motivated to continue.

“In all honesty, I don’t know what I will be doing yet, but 100 percent plan to carry on,” Metcalfe explained to MotoOnline. “It could still work out to be on the Honda – it will look different – or it could be a different brand. It’s unknown at the moment. I’m just going to explore the options and see what 2022 offers and beyond that, but I do plan to continue to race.

“I still want to be out there and, even though in this current season we only got through three rounds, I was still able to win a moto, land on the podium and get some good results. I do enjoy it and I’m motivated so I want to continue on. I feel like there is still a place for me there for me – I think it’s still important to have a veteran, senior rider in the circuit.”

Metcalfe expressed his desire to race both ProMX and the Australian Supercross Championship if the series proceed as per normal. The 2022 ProMX calendar is officially confirmed to kick off at Wonthaggi on 27 March, with the remaining seven rounds – all to be held on separate weekends – yet to be announced.