Duffy out of coma as extent of injuries are detailed

Lengthy road to recovery ahead for teenage Western Australian. 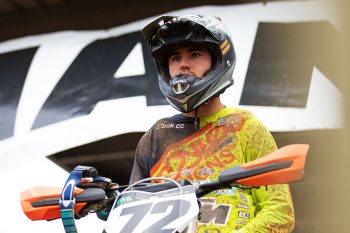 Western Australian teenager Regan Duffy is continuing to recover from his life-threatening injuries sustained at the state championship round in Bunbury this month, confirmed to be out of a coma after suffering a cardiac arrest and subsequent stroke following the incident.

Duffy, 19, remains hospitalised in Perth over a week on from his opening lap crash, enduring a lengthy road to recovery ahead due to the serious nature of his condition, but signs have been increasingly positive since waking over the weekend.

In detailing the extent of the injuries, Darren Duffy – the father of Regan – said that the impact in the multi-bike incident tore the branch of his brachiocephalic artery off his aorta completely, which led to immense internal complications. It is an injury that can often be fatal before arriving at the hospital.

According to Duffy, following delays in being able to land a helicopter at the Shrubland MX Park, Regan was eventually transported by road to the nearby Bunbury Hospital. While being treated locally for apparent collapsed lungs, he went into cardiac arrest due to the artery damage and required life-saving surgery prior to being air-lifted to the better-equipped hospital in Perth for further emergency procedures.

“The surgeon who worked on him, he came into the room yesterday and stood at the end of the bed just shaking his head – he said it’s unbelievable,” Darren Duffy told MotoOnline. “Nobody expected him to survive, but he’s pulled through it and obviously didn’t want to go. Regan is improving every day. His main risk now is that he doesn’t have another stroke, that’s what we’re scared of at this point. Fingers crossed.”

At this moment, Duffy is slowly recuperating and beginning a light rehabilitation process from his hospital bed. He is currently experiencing some difficulty with the left-hand side of his body as a result of the stroke and it’s uncertain if he will regain full use of his left arm.

While he faces this toughest race of all, it’s a crushing outcome for one of the country’s most highly-rated young talents. He had been on the verge of signing an MX2 World Championship contract for the 2022 season after finishing runner-up in the national MX1 series as a rookie this year.

A multiple Australian junior champion, Duffy went on to capture the MXD (Under 19s) crown on debut in 2019, but plans to step up to the MX2 category last year didn’t go ahead because of the covid-19 pandemic prompting the series cancellation.

Instead, he moved directly to the premier MX1 division as KTM Racing Team’s sole factory motocross rider in 2021, spectacularly winning the Wonthaggi season-opener before falling short of the title by only three points when it was prematurely declared three rounds in.

Duffy also starred in 2019 by becoming the youngest ever winner of the internationally-renowned Manjimup 15,000 at just 16 years of age, going on to represent Team Australia at Assen that same year riding a 450 in the Open class. He claimed P6 in the qualifier, charged through the pack for 11th in his first moto, then had a bike malfunction while challenging for a top 10 result in the final outing.