This year saw Honda Racing’s Kyle Webster capture the Penrite ProMX MX2 title in convincing fashion, securing five from six moto wins in the condensed season to claim the number one plate. In this edition of Five Questions, MotoOnline caught up with Webster to recap the championship as he looks ahead to MX1 for 2022. 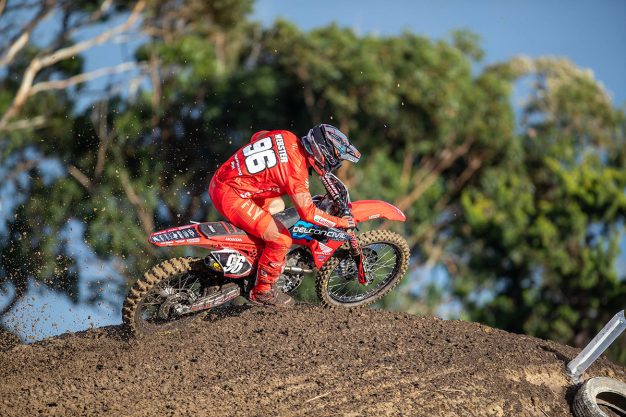 Firstly, congratulations on winning the MX2 title, it must be a pretty good feeling even under the circumstances in which you were crowned the champion?

Yeah, it’s definitely strange, it’s not really how I’d imagine I’d win my first one. I’m really stoked, I honestly just wish we could have kept on racing, that’s what we train hard to do and it sucks, but I’m glad we managed to get three rounds out and actually get a championship. I am really happy it just feels a little bit strange [laughs].

Were there any highlights of your 2021 season, it was a pretty dominant performance from you winning every race but one?

It was really good, I’m glad I put in so much effort last year and at the start of this year and at least get something back. A highlight for the year I would have to say Wonthaggi, in the past years I’ve had a lot of bad luck there and whatnot and at the first round this year I was really looking forward to hopefully turning that around. It was the first time I had ever gone 1-1 on the day and I think that’s definitely the highlight for me.

Have you got anything planned to celebrate winning the championship or is it pretty much straight into preparations next year stepping up to MX1?

I feel we will end up doing something, we are kind of in the middle of a training block at the moment – we’ve still been riding pretty much flat out recently. I think we will do something in the next few weeks maybe and then just settle it down towards the end of the year with riding, but at the moment we are still riding like normal, so it’s kind of just like any other day to be honest. Since a couple weeks after Maitland, I sort of started to jump onto a 450 here and there and spend a little more time on it and get more comfy with it. The last couple of months I’ve only ridden a 450, done a little bit of testing here and there and really starting to get my feel with that bike. I think it doesn’t really make a huge difference but it’s just a little bit of a jump start into next year. You’ve just won a title now, but say if you were to look at yourself in 12 months on the 450, what are you hoping to achieve?

I definitely want to be right up the pointy-end. I think with how hard we work and how solid the team and bike is we have no reason not to be. I haven’t raced a 450 a whole heap, so I’m glad I’ve got such a big amount of time on it now to come to grips with it, I suppose. As for the end of next year I really hope I’m right up there in the mix of things for the championship.

Is there anything that excites you most about making that step up to the premier class?

I think just mainly riding the bigger bike – I have ridden a 450 on and off since I was quite young and I have really enjoyed them. They are a different beast I suppose, they can bite you when they want and when you are on top riding them nicely they can be the best bike ever. I’m excited to just move up in the class, I feel like I’ve been in the lites class for ages, I’m really looking forward to going up and racing different guys and yeah being in the premier class.