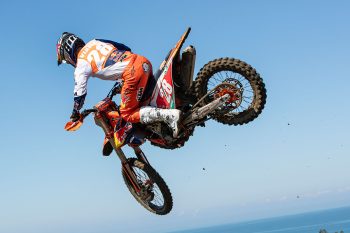 Defending MX2 world champion Tom Vialle will spend another season in the 250 class next year, before transitioning to MXGP in 2023 as part of a new four-year KTM contract extension.

The 20-year-old won his first title last year and has already claimed four GP wins this season, rapidly climbing the standings to P4 after breaking his hand in the early stages.

After entering the Red Bull KTM squad as an MX2 rookie in 2019, Vialle has made incredible progress and achieved outstanding results. He has now committed his future to the factory effort to bring his association with KTM up to more than half a decade.

“I’m so happy to continue with KTM,” Vialle said. “I want to give special thanks to Robert [Jonas] and Pit [Beirer], because they understand me and my wish to make another year in MX2 because I had some bad luck this season – I want another title.

“I feel so good with the team and I wanted to carry on with them. It was an easy decision… KTM is my first team! They were the first people who believed in me, so I am very grateful.”

KTM VP of motorsports off-road, Robert Jonas, added: “When Tom came into the Red Bull KTM team he was given the opportunity to show what he could do and he worked hard, listened, learned and delivered. I think he is a shining example to any youngster wanting to follow the same path.

“He has vindicated the belief that people like Joel Smets and Dirk Gruebel had in him and we’re delighted to watch how he’s progressed and become such a force with the KTM 250 SX-F. We’re also proud that we can continue the story together.

“It’s fantastic to create this longer-term project with Tom for both his last MX2 season and into MXGP. If we can continue as we have so far then we hope to have another special rider, team and machine combination coming up.”