Retiring legend Cairoli gets elusive title alongside Guadagnini and Lupino. The opening race (MXGP + MX2) saw two of the favourites, Glenn Coldenhoff (NED – Yamaha) and Cairoli, go down in the first turn from the outside gates in tough conditions.

It was soon Thomas Kjer Olsen (DEN – Husqvarna) who established himself out front, remaining composed to keep leading MX2 entry Tom Vialle (FRA – KTM) and Ben Watson (GBR – Yamaha) at bay and that’s how they would remain.

As for Coldenhoff, he climbed to 15th, still ahead of Roan Van De Moosdijk (NED – Kawasaki) with P17 in a difficult start for the defending champion team.

Cairoli was even worse off, finishing 21st, however, countryman Guadagnini rode to a solid fifth behind Arnaud Tonus (SUI – KTM), which would prove critical as the day wore on.

France, Belgium, Great Britain, Italy and Motorcycle Federation of Russia (MFR) were the top five nations following moto one, with the Netherlands down the order in eighth position with two motos remaining.

Race two (MX2 + Open) was all Jeffrey Herlings (NED – KTM) in control, stretching a 49.117s advantage by the end to lead Valentin Guillod (SUI – Yamaha) and Rene Hofer (AUT – KTM) at the flag.

It was a DNF from Vialle and 19th from French teammate Mathys Boisrame (FRA – Kawasaki) that was pivotal this time around, with Guadagnini’s sixth and Lupino’s seventh boosting the home team into the lead overall following two motos.

The third and final moto (MXGP + Open) was once again dominated by Herlings from the front, but it wasn’t enough as Cairoli and Lupino – despite an untimely fall around halfway and a penalty – held on with second and 17th-place moto finishes.

Herlings won race three easily ahead of Cairoli and Coldenhoff, with Watson another to crash heavily but remount for P4. Lupino ended up being penalised 10 positions for an off-track infringement in the first turn, but Italy marginally held on overall.

In the end it was Team Italy that topped the Nations on 37 points ahead of the Netherlands on 38, with Great Britain completing the podium on 39. Belgium’s hopes were crushed with both Van Doninck and Cyril Genot (BEL – KTM) both failing to finish race three.

While Herlings was untouched in the Open ranks, winning the MXGP category was an impressive Watson and Hofer did enough to claim victory in MX2 following his standout performance this afternoon. 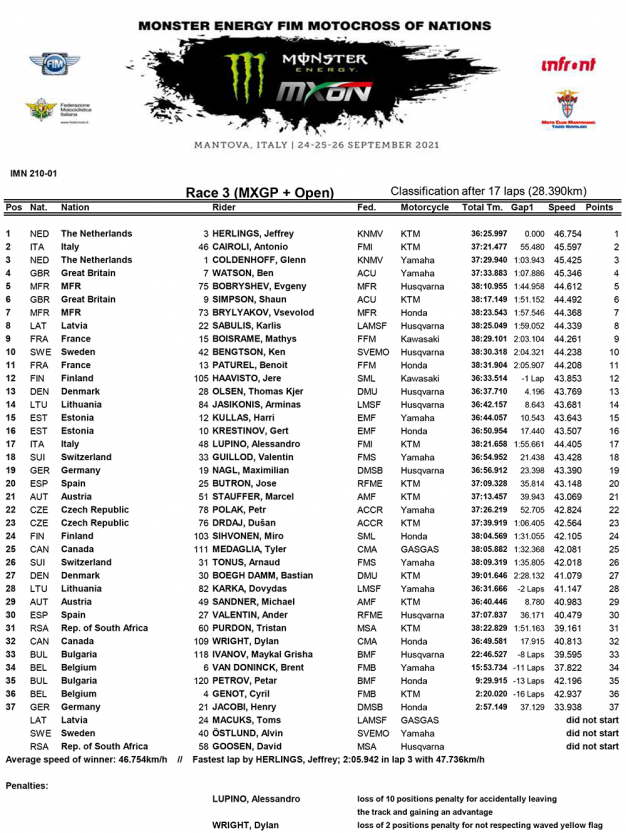 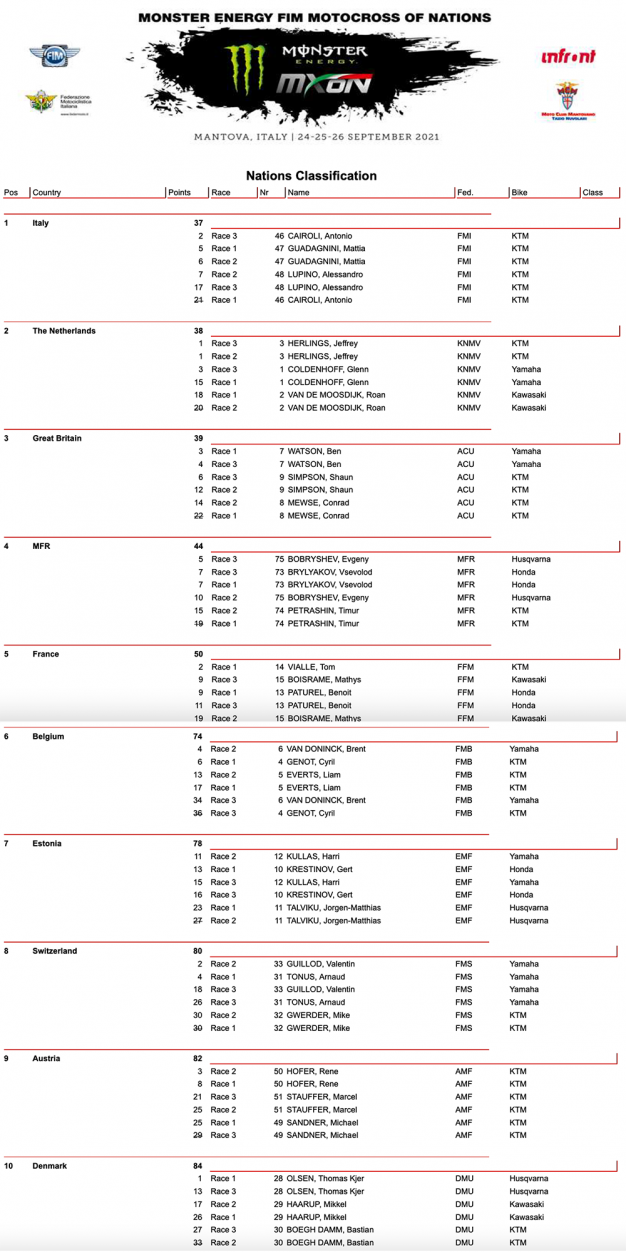