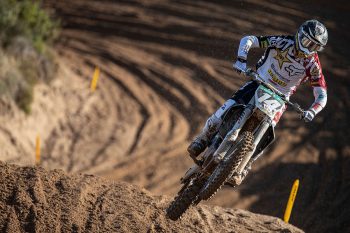 Being in the ‘wrong place at the wrong time’ at Riola Sardo left Australia’s Jed Beaton fighting to claim seventh overall on Sunday after recording 13-5 moto results.

It was moto one where Beaton saw his day turn sideways, collected by the bike of Monster Energy Yamaha’s Jago Geerts and damaging his front brake in the process.

Beaton was able to remount, but was left to finish the race with front brake damage sustained from the incident, eventually crossing the line in 13th position.

Race two provided better fortunes for the Rockstar Energy Husqvarna rider as he was able to work his way forward to finish fifth on the physically-demanding circuit. However, the bad luck in the first outing ultimately limited his points haul for the day.

“A bit of a frustrating day today,” Beaton reflected. “I was just in the wrong place at the wrong time in moto one as Jago Geerts crashed and then his bike bounced up and hit me off of mine. The crash damaged my front brake, so it wasn’t ideal, but I gave it everything I had and managed to score some points.

“I found a pretty good flow in race two and maintained a good pace. It was easy to make mistakes and I overexerted myself a little in the first one, so a fifth place wasn’t too bad. The next two rounds are back on hard-pack and tracks that I really like, so I’m looking forward to those and getting back up on the podium.”

Beaton – yet to secure a world championship seat for 2022 as he is slated to step up to the premier class – currently sits tied for fourth in the MX2 title race, equal on points with Thibault Benistant (Monster Energy Yamaha).

Strong results in the remaining rounds of this year’s MX2 World Championship could be crucial for Beaton to land an MXGP seat before he ages out of MX2, with the next opportunity to get back on the podium coming when the series resumes at Teutschenthal on 3 October for the MXGP of Germany.