Italian focused on recovery following incident at Sardegna round. 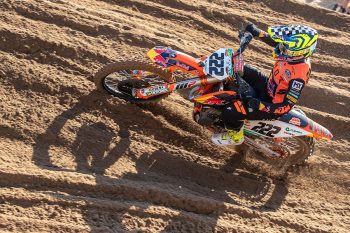 A scare in timed practice at the MXGP of Sardegna momentarily left retiring nine-time world champion Antonio Cairoli with a loss of feeling before later being cleared of serious injury.

Cairoli was left with pain in his neck and back after falling heavily in qualifying at Riola Sardo, forcing him to sit out round 10 of the world championship.

“A very bad day today,” Cairoli recalled. “I was hoping for a good race because I like this track a lot. It was a small mistake that cost a lot of energy and affected me.

“When I was on the ground I didn’t feel everything so well… I was pretty scared. With the check afterwards, it was a relief to know everything was okay, but the impact meant I could not race.

“It would have been good to take some points today, but that’s part of racing. We’ll focus on getting healthy again and enjoying this last part of the season.”

He elaborated further Sunday evening via social media: “Heavy fall in the second lap of timed practice left me for a few moments without feeling in my legs or arms. Shortly after everything was back to almost normal and after several checks (negative results fortunately), we still couldn’t take part in the race!”

The Italian has won three motos so far this season and will have 16 races remaining in 2021 season to add to his 181 career victories. It’s unclear if Cairoli will still enter this weekend’s Motocross of Nations (MXoN) at Mantova as part of Team Italy.