A 10-year contract to be considered by international governing body. 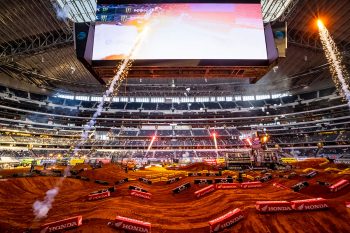 Plans are in the works to launch a new FIM Supercross World Championship from 2022 as the Federation Internationale de Motocyclisme (FIM) seeks a long-term promoter.

A call for expressions of interest has been made by the European-based international governing body following its separation from Monster Energy AMA Supercross.

An 11th-hour arrangement would potentially commence next year and span through 2031 in an exclusive 10-year commitment, with candidates invited to register by 15 October. That date leaves little time to form any extensive plans.

It was confirmed that US series promoter Feld Motor Sports had split with the FIM in June following almost two decades of the world championship being operated off the back of the American championship, which will solely run under American Motorcyclist Association (AMA) sanctioning again from 2022.

From 2002 through to 2006, the series started in December and visited Switzerland, Holland, Spain and Canada before settling into a recurring domestic schedule in the US. Toronto then became a regular fixture and served as the lone international round through until the 2017 season.

Previous to that, low-profile world championship series had taken place in European countries, but it has always been America considered to be the pinnacle of the sport globally. A number of standalone events are still successfully promoted in Europe including those in Paris and Geneva.