Team Honda HRC standout Jett Lawrence claimed his first Lucas Oil Pro Motocross 250MX title during the season finale at Hangtown, the 18-year-old becoming the first Australian to capture the crown. For this edition of Countdown, we take a look at five pivotal moments on the road to the teenager’s success from the 2021 outdoor season. 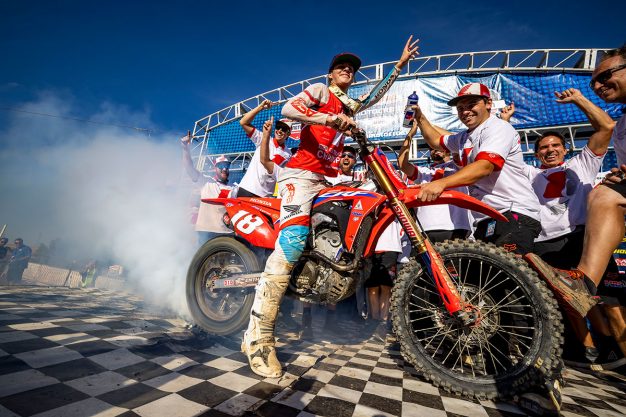 5. Season-opening victory at Fox Raceway:
Showing significant pace during Supercross earlier in the year and taking victory in the East-West Showdown, Lawrence was a recognised as a chance to claim this year’s 250MX championship when the gates dropped at round one. A solid charge to second in the opening moto behind Jeremy Martin opened his account, before a commanding victory in moto two – passing both Martin and Justin Cooper en route to victory – showed he was a force to be reckoned with as he left Fox Raceway with the red plate.

4. Back on top come Unadilla:
While the Australian came out of the gates strongly, he experienced a short-lived slump in form as the season approached the halfway point, mostly as a result of bad starts while his opponents capitalised. Lawrence was able to pick up moto victories at Thunder Valley and RedBud, however, inconsistencies in other motos saw him relinquish the red plate to Cooper at Spring Creek. Lawrence finally bounced back in round eight at Unadilla, where he claimed his second overall victory of the season courtesy of a 2-1 scorecard and showed he was certainly not out of the fight.

3. Ironman clean-sweep:
After backing up his overall win at Unadilla with a 2-2 at Budds Creek, Lawrence stepped it up at Ironman as he dominated the day, winning both motos for the first 1-1 day of his career. The Team Honda HRC rider withstood pressure from Jeremy Martin in the first moto before the Yamaha rider crashed heavily, leaving the Aussie to ride a controlled race to victory ahead of Jo Shimoda, while Cooper was fourth. Moto two saw the younger Lawrence brother quickly get to the front, with Cooper again fourth, which marked a critical pendulum swing in the momentum of the championship as Lawrence was able to reclaim the red plate. 2. Stepping up again at Pala 2:
After winning the season-opener at Fox Raceway, it was expected the Queenslander would put on a strong display in the second outing at the circuit during the 2021 Lucas Oil Pro Motocross Championship. That he did, in what proved to be a decisive weekend Lawrence scored another 1-1 making, it four race victories in a row as Cooper went 5-2, meaning Lawrence entered the last round with a decisive 23-point lead. It was certainly advantage Lawrence at this point, as he had now finished no lower than second in the last nine motos, while Cooper had only been on the podium three times over the same period.

1. Championship won in Hangtown finals:
With one-hand on the championship trophy heading into the season closer at Hangtown, Lawrence encountered one of his most difficult days yet in the series. An early crash in moto one left him with some work to do, before getting caught up in another rider’s incident left him way outside the top 20. He was able to recover to eighth, however, Cooper rose to the occasion and cranked the pressure on the 18-year-old entering the final moto. The two title rivals started next to eachother as the gates dropped for moto two, as Cooper slotted into P2, with Lawrence seventh. Another early crash from the number 18 kept fans on their toes as Lawrence needed to regain positions to win the title, with Cooper again doing what he had to do out front. Lawrence recovered and put on a determined ride to finish third, claiming the 250MX championship in the process for a historic result aboard the factory CRF250R.