MXGP legend Cairoli to retire at conclusion of 2021 season 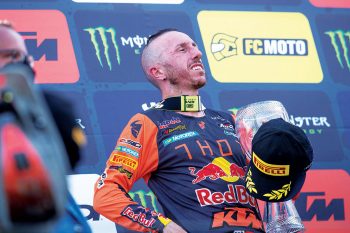 Nine-time world champion Antonio Cairoli has announced his retirement, effective at the conclusion of the 2021 MXGP World Championship season.

The Red Bull KTM Factory Racing legend confirmed the news this morning, set to hang up the helmet following near two decades of international competition.

“It’s not an easy decision to make,” 35-year-old Cairoli announced. “I’ve always said numbers and statistics don’t mean much to me – I think it was an achievement at the time for my family and I to win a world championship, so having had a career like this is very special.

“I feel like it’s a good time to quit. Everything around me feels like it’s the right decision and we’re still trying to win the title this year and my motivation remains intact.

“I would like to thank all those who have helped and supported me since my arrival on the world championship and throughout the road travelled since. I felt like part of the KTM family from day one and we will continue our work and relationships together, but now in a different way.”

Cairoli won the MX2 title in 2005 and 2007, before scoring this first premier class crown in 2009 – all with Yamaha. He switched to KTM the following year and won five more MXGP championships consecutively between 2010-2014, then added another in 2017.

In his 18th season of the world championship, Cairoli is currently ranked third in the 2021 championship standings, only 29 points outside of defending champion Tim Gajser. He will also represent Italy in this month’s Motocross of Nations (MXoN).