ProMX MX1 championship leader's preference is for series to resume. 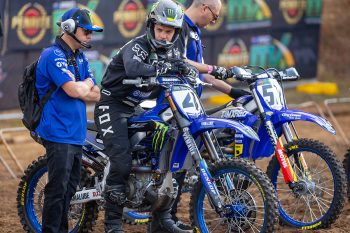 Current Penrite ProMX MX1 points-leader Luke Clout is seeking clarity on the remainder of the 2021 season, as the next step for competitors remains up in the air.

Clout, who confirmed he has a contract with CDR Yamaha Monster Energy for next year when contacted by MotoOnline – currently leads the championship by three points.

As previously outlined, if the championship were to be cancelled just three rounds in as a result of the covid-19 pandemic, the minimum requirements to crown champions have been met. However, the New South Wales rider’s preference is still to restart.

“I’m all for racing,” Clout admitted. “If we are going to go racing, let’s do it, but I think everyone needs a little bit of clarity as to what’s happening – we’re just left in limbo.

“At the end of the day all of us would like to go racing, we’re sitting in lockdown, just waiting to go. With no end goal, we can’t really make a plan for anything and that can be tough.”

Sydney-based Clout has been in lockdown over the break with limited seat time taking place and the fact that many of his primary rivals have been able to continue riding while living in less restricted areas could put him on the back-foot if the series resumes.

“I’ve ridden about half a dozen times since Maitland,” Clout added. “With what’s happening it’s pretty tough to go riding, even training I haven’t been able to go to the gym or anything like that. I’m just cycling and running at the moment.”

With no set return date to racing and recent rumours mounting that ProMX could be called without additional rounds, Motorcycling Australia’s series organisers are facing a race against time in a bid to resume. The Australian Supercross Championship is set to be pushed back to January, as recently reported.

With Australia not entering the 2021 Motocross of Nations (MXoN) later this month in Mantova, Italy, the Yamaha rider also confirmed that he had applied for a position on the team, but was left somewhat in the dark as to what was happening.

“Look, I wanted to go for sure, but obviously with everything that is happening in the world right now it made it pretty tough,” continued Clout.

“I applied to go and I’m sure everyone else did to. I didn’t really hear much about anything then everything kind of got put up in the air. At the end of the day, I think it just got too hard for everyone.”