Uplift in form sees Todd return to top 10 in Turkey 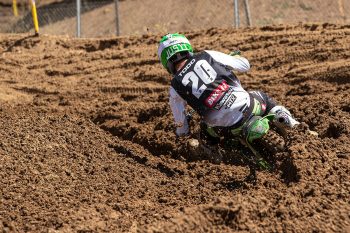 Highlighting a return to form, Bike It MTX Kawasaki MX2 rider Wilson Todd landed eighth overall in the first event of the MXGP double-header at Turkey.

Todd didn’t have the best qualifying in 12th, and a poor drive out of the gates left him to recover to 11th in the opening moto.

A stronger start in the second moto saw the 23-year-old launch into the top 10. From there he worked his way forwards, making a pass on the last lap to cross the line in seventh.

“The day wasn’t too bad,” Todd explained. “The track was ok with some good ruts but you needed a good start to run up front.

“I spun at the gate in the first moto which left me just outside the top ten. The second start was better but I was just a little too far outside from my gate-pick at turn one and got pushed out so had to chase again.”

The result at Afyonkarahisar marks the fourth time the Australian has finished inside the top 10 in the MX2 World Championship this season and equals his best overall position of 2021.

Team manager Steve Dixon indicated there was potential for a greater result for Todd, as he looks forward to the remaining races of the championship.

“Wilson was looking fast in qualifying, but on the last lap, a rider got in the way which cost him potentially a top five starting position,” Dixon explained.

“Another eighth overall is not to be sniffed at when you’re at this level, there’s still another 10 rounds to go. It’s a long hard session now to the end of the season.”

The season resumes tomorrow for round nine, again at the Afyonkarahisar track in Turkey.