Australian Supercross Championship to be delayed until January

The 2021 season now more likely to take place early in the new year. 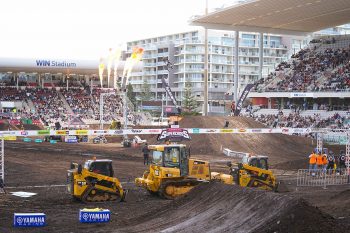 The 2021 Australian Supercross Championship is on the verge of officially being delayed until January next year as organisers work to salvage this year’s series.

It’s indicated that there is now potential for AUS Supercross to take place at the beginning of 2022, before reverting to a more traditional schedule at the back-end of next year.

After being cancelled altogether in 2020, this year’s championship was due to commence mid-October in Queensland, however, the effects of the covid-19 pandemic have severely impacted that possibility with only three rounds of Penrite ProMX currently completed.

“Long story short is, we are looking for alternate venues on the basis of the series having to be postponed to this year until coronavirus becomes more predictable,” AUS SX Holdings’ Adam Bailey explained when contacted by MotoOnline.

If those plans do eventuate and the series is bumped back into the new year, it is still intended that the 2022 Australian Supercross Championship will proceed in a more regular timeframe next October, including the return of the AUS-X Open.

“We are confident that through the tail-end of 2022 we should be able to be back to the original calendar and the goal would be to have a full championship then and hopefully bring back the AUS-X Open at the same time,” Bailey added.

The news comes as the entire ProMX Championship remains on hold due to ongoing state border restrictions and lockdowns across the country. It’s not clear when Motorcycling Australia (MA) intends to relaunch the series, however, it’s not expected to restart prior to the final quarter at the earliest.