With one round to spare in the 2021 Pro Motocross season, Dylan Ferrandis has been crowned 450MX champion as Eli Tomac took his second overall win in succession and Jett Lawrence swept 250MX at Fox Raceway.

It was a hot day in Pala, California for the penultimate round of the 2021 Lucas Oil Pro Motocross Championship at Fox Raceway, the weather providing some of the most grueling conditions the series has seen all summer.

Ferrandis got the day going on the right foot by logging the fastest lap of the morning qualifying sessions, edging out title rival Ken Roczen (Team Honda HRC) in the closing moments of the session.

When the gate dropped in moto one, Roczen blasted out to the lead with a massive holeshot ahead of Cooper Webb (Red Bull KTM) and Ferrandis. Roczen gapped the field early, with Ferrandis slotting into second early in the moto.

At the halfway point, Ferrandis found his way around Roczen, with Tomac eventually closing and making the pass for second. Ferrandis would go on to win the moto with Tomac and Roczen rounding out the podium.

In moto two, Webb grabbed the holeshot, with Roczen quickly making the pass to take the lead early on. Ferrandis wasted no time heading toward the front after a third-place start, passing Webb and then Roczen within one lap.

From deep in the field, Tomac began to charge, making short work of everyone in front of him, finding the lead and taking off immediately with incredible pace.

Roczen faded through the field to an eventual sixth-place finish, while Tomac took the moto win in dominant fashion over Ferrandis and Webb. Tomac’s 2-1 finish saw him take the overall over the 2021 450MX champion Ferrandis.

Third place went to Webb who took his second podium in succession and he continues to find form late in the season. Major changes to the bike helped propel him to the front last week and the benefits are continuing to pay off.

Roczen managed to finish fourth overall with 3-6 scores on the day as the heat clearly took it’s toll on the former champion. Tomac is now looming behind him in the points standings for second place overall with just two motos left in the season.

Rounding out the top five was Christian Craig (Monster Energy Star Racing Yamaha) in his return to racing after missing round 10 with injuries sustained at Budds Creek. Craig took home consistent 5-4 moto’s on the day to notch his third top five of the season.

Twisted Tea HEP Suzuki rider Max Anstie found his way further up the leaderboard than he has all season, taking his first top five finish in the second moto, ultimately finishing sixth overall on the day.

Anstie’s teammate Brandon Hartranft finished the day in eighth overall with 10-8 moto scores taking him to his third top 10 overall of his rookie 450MX season.

Ninth on the day was Rocky Mountain ATV/MC KTM rider Joey Savatgy who had an impressive qualifying effort with fifth, eventually parlaying that momentum to 9-9 finishes.

The final spot in the top 10 went to Fredrik Noren with 11-10 moto scores aboard his privateer KTM. Noren completing just his eighth Pro Motocross race of the season, notching his first top 10 overall of the year.

Ferrandis’ title is the first in the 450MX class for Monster Energy Star Racing Yamaha, in just their first season taking over the factory 450 effort for Yamaha. Their first premier-class title since 2007 also see’s Ferrandis become the first Frenchman to win the championship in 30 years. Jett Lawrence continued his winning ways at Fox Raceway, taking both moto wins and continuing to stretch his points lead in the penultimate round of the 250MX championship.

Coming into the day, Lawrence entered the day with the red-plate for the first time since round four of the 2021 Lucas Oil Pro Motocross Championship, leading Justin Cooper (Monster Energy Star Racing Yamaha) by 11 points with just two rounds to go.

Cooper took the first punch on the day, topping the timesheets ahead of Lawrence by just under a half-second, setting up what looked to be a battle for the red-plate with just four motos left.

When the gate dropped on the opening moto it was Max Vohland (Red Bull KTM) with the holeshot ahead of Michael Mosiman (TLD Red Bull GasGas) and Josh Varize putting his brand new Rockstar Husqvarna ride third off the line.

Jett Lawrence was fourth, quickly making his way to second as Mosiman had passed for the lead and started to create a gap at the front. Cooper was mired in seventh early on and failed to make up any positions early on.

Mosiman would eventually crash and drop to fifth, giving Jett the lead and eventually the moto win with Mosiman eventually bouncing back to second and RJ Hampshire (Rockstar Energy Husqvarna) rounded out the podium, with Cooper finishing in fifth.

In moto two, Lawrence launched out of the gate for his first holeshot of the season, ahead of Mosiman and Cooper who got a much better start than in moto one.

Immediately stretching out a gap that ballooned to six seconds by the halfway point, Lawrence looked to be in total control of the day.

Cooper settled into third place but began to charge with 10 minutes left in the moto, eventually catching Mosiman and making the pass, leaving him 10 minutes to catch Lawrence who was 10 seconds ahead of him.

Ultimately, Lawrence was not to be denied and take his fourth moto win and second overall in succession, stretching his points lead to 23 over Cooper in the championship standings by days end.

Mosiman’s 2-4 moto scores would see him finish second overall in just his second race back from injury, as he looks to finish of the season with momentum heading into the offseason.

Cooper salvaged third by way of 5-2 moto scores, leaving everything on the track in his attempt to catch Lawrence in moto two. He’ll need to throw everything at Lawrence if he’s going to close the gap in the championship in next weekend’s final round.

A 6-6 day in California was a welcomed improvement for Hunter Lawrence (Team Honda HRC) after a tough round last weekend that saw him finish deep in the top 10.

Behind him was Hampshire with another inconsistent day via a first turn crash in the second moto that saw him finish 13th. Hampshire will have one more opportunity to grab his first overall of the season.

Seventh on the day went to Dilan Schwartz, the BarX Chaparral Suzuki rider notching the best finish of his career with 10-8 moto scores.

Behind him was Varize who had a breakout day in the first of two rounds as a fill in rider for Rockstar Energy Husqvarna. His 9-9 scores came by way of great starts that saw him run toward the front in both motos.

The series now heads to Hangtown for the final round next Saturday, as Lawrence leads Cooper by 23 points, with clear momentum on his side after back-to-back 1-1 finishes. 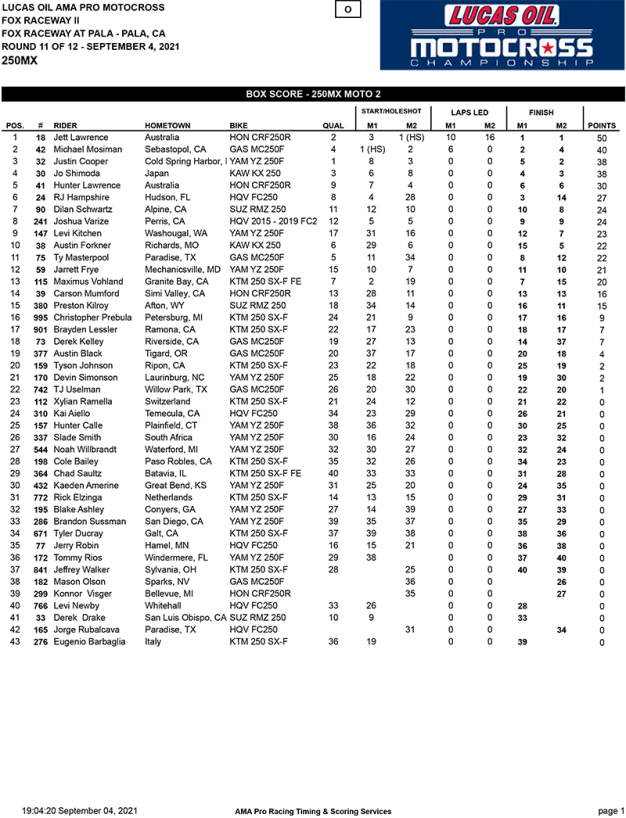