Lawrence to remain on current CRF in 250MX title bid 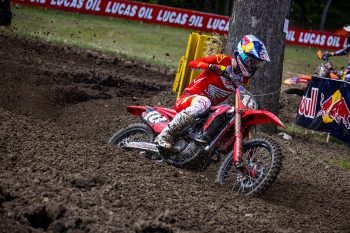 Championship points leader in the 250MX class Jett Lawrence will remain aboard his 2021 spec machine for the remainder of the season, despite a rumoured switch to the 2022 CRF250R.

Following his dominant 1-1 performance in the 11th round of the 2021 Lucas Oil Pro Motocross Championship, Lawrence addressed rumours that a switch to the all-new 2022 CRF250 could be coming as the season draws to a close.

While he admits it was considered, he’s currently found great form aboard the bike he’s been on throughout the season, stating that a lack of testing hindered their chance to roll out the new bike.

“Yeah I would have loved to race the new bike early,” Lawrence explained. “But we haven’t been able to get any testing done early so I think it might be postponed. I would have loved to race the bike and try to get some time on it already to see how it is, but you know we’ve got Trey [Canard], he just started testing the bike this week and we’ve just rode the stock one so we haven’t done much testing yet.

“Like I said, I would have loved to race the bike but right now I’ve got bigger things to focus on right now. Changing the bike would have been cool but changing a bike right now might not be the best idea, I’m feeling really good on my bike and my bike right now is handling great.”

After clawing his way back to the top of the championship with just two rounds to go, the series now returns to Fox Raceway, where Lawrence got the 2021 season started with an overall win. Despite his solid past at the track, he says he feels no advantage heading into the penultimate round on Saturday.

“I’m not really going to change anything, I’m going in with the same mentality that I did [at Ironman],” he continued. “It’s just another track that has jumps, turns and yeah, I’m trying to go there and go fast that’s the only thing I have in my mind.”