There’s a bunch of excitement surrounding the 2022 Honda CRF250R, a completely redesigned model that we were able to put through its paces at Glen Helen. Lighter, faster, stronger was the target and, from what we’ve experienced so far, the brand is living up to expectations.

The goal for the 2022 CRF250R design team was ambitious and to achieve the latest racing evolution, Honda’s engineers focused their efforts on cutting weight down to 104 kilograms, increasing engine performance, and adding toughness. The entire tech rundown can be found in our previous Detailed post.

Upon arrival, the first thing I noticed was the overall look of the motorcycle, complete with a single exhaust and now with its all-new design to match the CRF450R that was released in 2021. Before I went out, we checked the sag to make sure it was right for me and I went straight onto the track.

It didn’t take much time at all to feel comfortable on the bike, right away the bike felt super-balanced, really easy to control and overall just really solid, which was allowing me to push almost immediately.

The 2022 model received a modified air intake, revised valve timing and a straightened exhaust port with a single exhaust header and muffler, which resulted in a 20 percent increase in power at 6500rpm, which I noticed within the first lap. 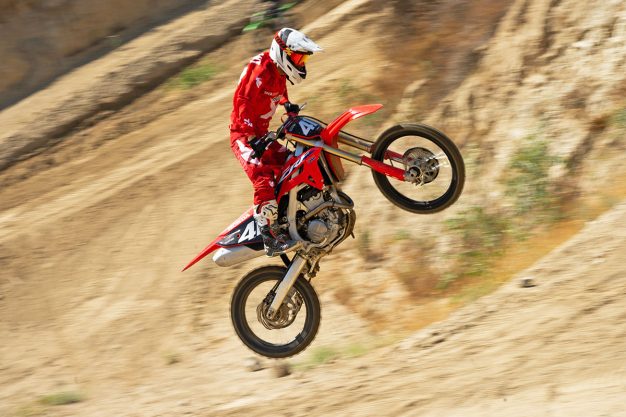 I was extremely impressed with the power of the bike right away. Usually, I would struggle with a stock 250 with getting out the corners with enough power, especially trying to hit most of the corners in third gear. This bike pulled great and I didn’t feel like I had to get that extra shift down and do a short shift on the exits right out the corner.

The previous model was struggling a little with the bottom- to mid-end power and I had no struggles with the power at all on the new bike thanks to the significant increase in bottom-end torque via the changes listed above.

The 2022 received a redesigned clutch assembly, now packing nine discs instead of eight, increasing friction and lowering the load on individual discs. With the new clutch basket receiving an additional friction spring, the spring load has been reduced, with a few other changes said to improve clutch endurance by 21 percent, all while making lever pull lighter. 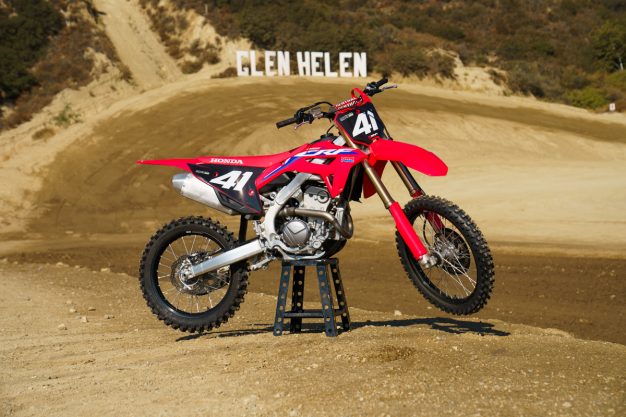 To bring the updates made to the engine to life fully, Honda updated the ECU and provided all new mapping and also added launch control. There are three different settings for the mapping, standard, a bit more of a mellow map, as well as an aggressive map.

I started on the standard mapping just to feel what it was like and then switched to the aggressive map. Both of them felt really good, but I have more of an aggressive riding style and I liked the extra bit of bottom-end power the aggressive mapping had.

With gearing I thought the standard gearing was great and really consistent, it would be nice to play with some different gearing, but I didn’t feel like I needed to get much more bottom- or top-end power and thought it was solid all the way through.

Another thing I was very impressed with were the brakes. I feel I could really charge long and hard down the long downhills and I could brake really late and I felt myself comfortably pushing further and further.

They were really progressive, so when I wanted to be more smooth on the brakes it worked really well, but when I wanted to charge really hard and brake late, the bike would grab and slow down right away. 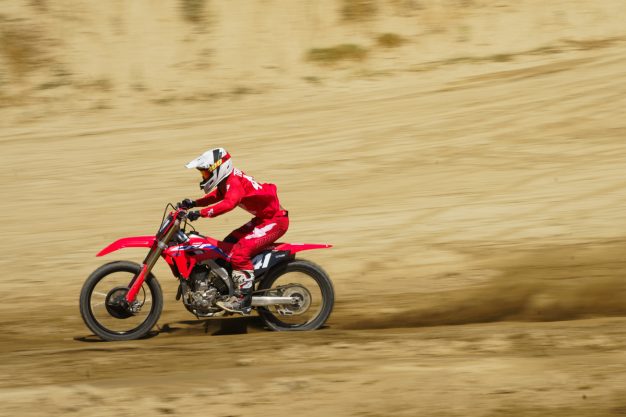 For the new model Honda set out to improve on the handling of the 2021 model, which was thought to be slightly rigid, though it tracked reliably and turned well overall.

I felt like I could put the new bike where I needed it and it never felt rigid to me at all, especially when entering the turns. With my style, I often like to stand pretty late into my corners and steer the entries with my legs. That said, I felt like I could really come in hot and pitch and turn the bike as needed.

Before making any changes to the suspension, I felt the front end was a little bit twitchy when I was charging hard into the small braking bumps, but in saying that, it would recover really quickly. It never caused any huge mistakes, but I did struggle to trust the front fully.

I ended up softening the front compression and slowing the rebound down slightly, eventually going stiffer on high-speed compression in the rear and dropping down the forks a little bit. 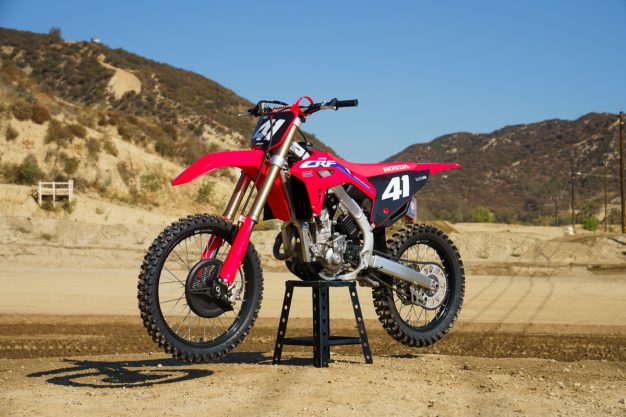 After making those small changes it definitely felt better and I feel like with some more testing you could get the suspension really good. But again, there was no point in which I was ever uncomfortable on the bike from the first turn of a wheel.

Coming out of the corners, the bike sat really well and I never felt any hesitation to get on the gas hard as it remained stable throughout corner exit and never wanted to get jumpy or twitchy.

Even though there are not many jumps at Glen Helen, I felt comfortable jumping everything first lap and didn’t have to try and figure out how the bike felt in the air, I could throw it around and put it where I wanted.

Ergonomics was a focal point for the design team, listing the rider-active layout as a key feature for the new model and with those changes in mind, the bike felt on point to me.

One thing that stood out was how slim the bike felt, I didn’t really feel like there was much I would want to change with how the bike sat or how it felt balance-wise. I could really control the bike under me when I was standing, it always felt like I had full control. 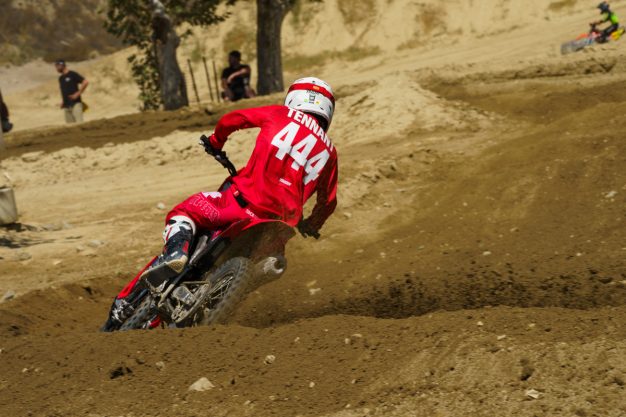 I often struggle with some of the standard seats with how slippery they can be, but I felt where I placed myself in my corners, I could stick the whole way through. That’s a minor benefit, but important for sure.

It comes stock with Pirelli MX32 tires now after historically being equipped with Dunlop and I could trust the feel of them and felt like it had great grip all round, which I was pleasantly surprised with.

Overall, I was very surprised by the bike, after reviewing the changes made from the previous year, I expected it to be solid, but I didn’t expect it to be as good as it is. Honestly, I felt great on the bike and felt I could really push it, which is impressive in stock trim.

I would be happy riding the bike as, is aside from getting the suspension a bit more dialled in for me and my style to be a bit more comfortable to push the bike to its limits. It would suit all levels of riders right out of the gate as I feel it offers comfort and calmer settings for the beginner to intermediate rider, but has that extra power and aggression to it if you want a platform to go ahead and race. 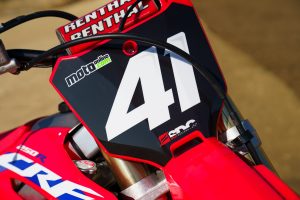 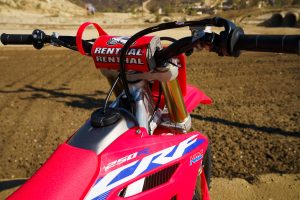 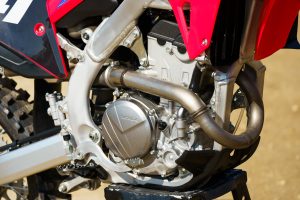 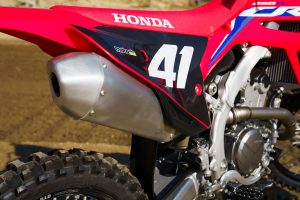 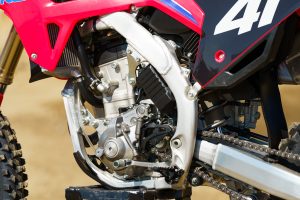 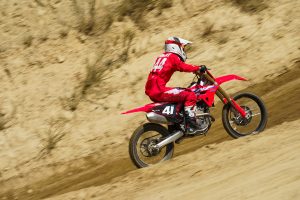 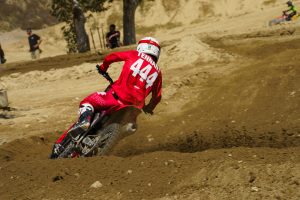 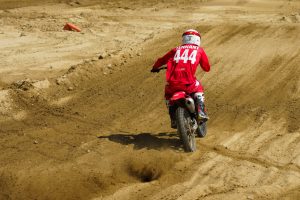 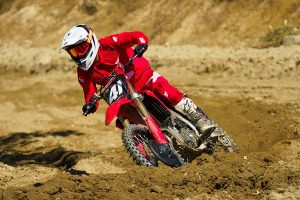