Achieving the first 1-1 result of his Lucas Oil Pro Motocross career, Team Honda HRC’s Jett Lawrence has taken control of the 2021 250MX championship as the overall at Ironman propels the 18-year-old to an 11-point lead with four races to go. The Australian spoke to the media post-race in this Conversation. 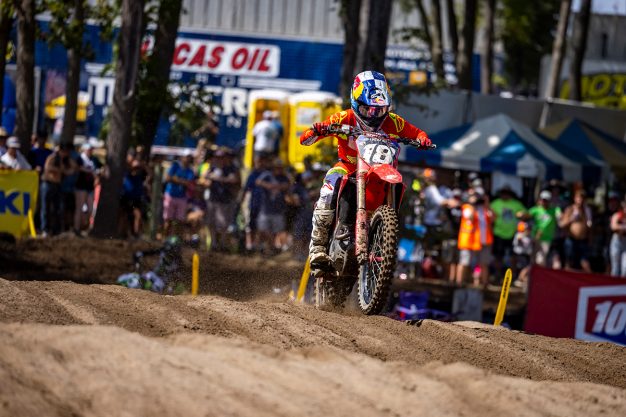 Today was probably the best performance we’ve seen from you in your professional career, how was it?

Today was just a really good day. Was having fun on the track and yeah, just having a good time on the track, had a good flow. I felt like the vibe was good at the truck you know and was feeling good all day. It was good to get two good starts out and that really helped me today to execute what I did. I think it was just an all-around great day, everything just kind of fell into place really, not many mistakes, so it was good.

There were some rumours that you could be potentially bringing out the 2022 CRF250R for the rest of the season, any truth to that, and what’s your take on it?

Today you gained a lot of points back in the championship, making things look a lot better on your end, how do you feel with this points gap going into the final two rounds?

It was obviously pretty nice to get the points lead back and get some space, but I mean it’s good but it doesn’t really matter if you have it now, the main thing is having it at the last round. I’m obviously pumped I got it back but I’m going to be making sure I can get [the gap] bigger and just go into these last two races like I did today. Go in and give it my all and see where I end up. 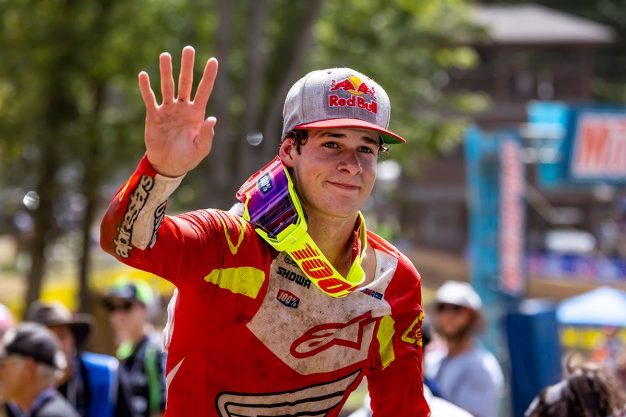 What will you do the next week ahead of Pala? Is there more riding for you or is it really just keeping yourself free and clear.

I don’t think I will change anything, you look at it and if something’s not broken why would you fix it. The training I’ve been doing is obviously enough, this series is pretty gnarly so I don’t want to put myself down too deep it’s already the end of the season. Otherwise, no, you don’t want to try to do too much, we’re at the end of the season, we’re already pretty fatigued mentally and physically so I don’t think we’ll be changing anything really.

The track seemed like one of the more racey tracks all year, what’d you think of it?

First moto was pretty good with lines, the second one kind of sucked to be honest, it was pretty flat and not as rough as some of the other tracks. It was a little disappointing because this track is pretty sick and gets pretty rough. It caused some great racing I felt like, in the first one with passing and that, so yeah.

You had the red-plate earlier this year, then there maybe was that little mid-season, I don’t want to call it a slump, but you had to kind of dig a little deeper and now you’re back. Is there anything in the last few weeks that’s clicked, has it been a matter of starts, what has been the change that’s helped you find momentum?

I think you’d have to be blind to not see what the problem has really been, it’s just been the starts. My riding’s not that bad it’s just that at a few races I’ve had those stupid little mistakes. It’s just been my starts that have been my problem. I think the best thing [I’ve done to fix it] was just not worrying about it. I was worrying about it trying to fix them and almost made it worse because I was trying to think more of it and trying to make sure I did good at it.