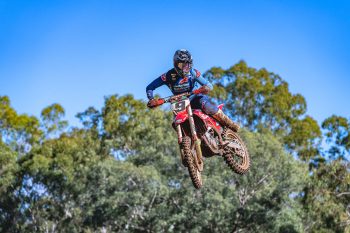 GasGas Racing Team’s Aaron Tanti scored third overall in the 2021 King of Capricorn at Rockhampton, displaying a variety of strengths as he continues to swiftly adapt to the premier class.

After showcasing his potential in Penrite ProMX prior to the series going on hold, the factory GasGas rider starred in Queensland last weekend.

The first four races saw Tanti finish consistently on the podium, taking a win in the third outing ahead of ProMX regulars including Todd Waters, Kirk Gibbs and MX2 rider Jesse Dobson.

It wasn’t all smooth sailing, however, as he then crashed early in race five – the first of four three-lap elimination races, leaving him in some pain to limp home in 13th. Showing grit and determination, Tanti rebounded to score two more victories in the remaining four races, helping take him to round out the overall podium.

“It was a pretty good weekend for me in a way,” Tanti recalled. “I started off pretty strong getting the Superpole and my starts were definitely on point.

“Everything was all going well until the fifth race – the start of the three-lap elimination races. I had quite a big crash and ended up getting up and rolling around to 13th, so I had to ride out the rest of the day in some pain after that one.

“I ended up managing to still get third overall with a few wins under my belt and I was pretty happy with how everything went. The bike was handling well, it was definitely going well out there as I’m pretty sure I hole-shotted most of the races.

“I was just stoked with the event as well, the organisers did a good job and I definitely look forward to doing it every year. It was pretty good weekend while nationals isn’t happening to get some good racing in against some of the fast boys, some of the 250 boys as well and there was a lot of Queensland talent up there this weekend.”

In the second running of the now annual standalone event, it was Husqvarna Racing Team’s Todd Waters who again emerged victorious to take his second King of Capricorn title ahead of Kirk Gibbs (Honda Racing) and Tanti.