Double for Waters in second King of Capricorn 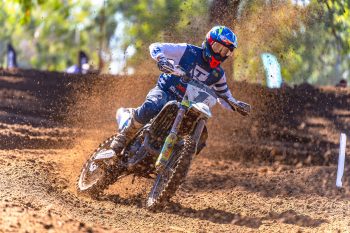 National champion Todd Waters emerged victorious at the 2021 King of Capricorn, winning both the premier class and two-stroke category in the second running of the annual Rockhampton event.

Waters proved consistency was key across the unique nine-race King of Capricorn format, finishing no lower than second in each outing to take the crown for the second year in a row.

The Husqvarna Racing Team rider was able to overcome a host of regular ProMX riders in attendance, with a variety of shorter and longer races keeping all competitors on their toes.

Waters took victory in the opening 10 lap bout before repeating his victory in the second race, a five-lap outing.  A second and first in races three and four saw the FC 450 rider continue to lead the points, as the King of Capricorn moved into the unique elimination format.

Waters comfortably survived the knock-out process and finished off a strong event for both himself and the Husqvarna Racing Team taking the overall win ahead of Kirk Gibbs (Honda Racing Team) and Aaron Tanti (GasGas Racing Team).

“Getting back up to Rockhampton, the King of Capricorn last year was the first year and we managed to take it out,” Waters explained.

“To come back up and back it up was I stoked to get the win and to see the progress of the event, Mike Ward and the Rockhampton club have put a massive effort in prior to the event this year-round, that was cool.

“The best thing was the atmosphere and the trophy was insane, it reminded me a bit of America as we got a trophy with a bull’s horn on it. But overall, the track was tip-top and the racing was really good, we had Aaron Tanti, Kirk Gibbs, Jesse Dobson, Levi Rogers and a bunch of local kids, it was really good.”

Waters also made an appearance in the Senior Two-Stroke category, where he dominated winning all four races to score a perfect 100 points and the overall victory riding a TC 250.