After a dominant performance last weekend in round eight of the Lucas Oil Pro Motocross Championship, momentum seemed to be on the side of Roczen, who was fastest in the morning sessions and looked poised for another win.

As the gate dropped on moto one, Cooper Webb (Red Bull KTM) grabbed the holeshot with Roczen just behind, while Ferrandis was mired back in sixth.

Roczen grabbed the lead early and began to check out, as Sexton worked his way past Webb and Tomac to get into second. Ferrandis charged forward, eventually making it into the top three with 12 minutes to go.

Sexton and Ferrandis began to reel in Roczen, with Ferrandis making the move for second and eventually finding Roczen at the front with two laps to go.

Standing strong to the pressure of Ferrandis in the last half lap, Roczen held on to take the win over a frustrated Ferrandis in second, with Second taking a distant third.

In moto two, Roczen powered to the holeshot and looked in position to take his fourth moto win on the trot to swing the championship momentum to his favor.

As the field sorted itself out in the opening laps, Sexton charged through and into second, passing Ferrandis and Tomac in the process who were third and fourth.

The top four broke away from the pack and at the halfway point were all covered by under five seconds. Lapped traffic, which was a factor all day, began to come into play as Ferrandis found his way past Sexton and into second.

With just under eight minutes to go, Ferrandis charged past Roczen and took the lead, stretching out a bit of a gap with five laps to go. Roczen surged in the closing stages, but was unable to get close enough to make pass attempt.

This left Ferrandis with the moto win and the overall, trading 1-2 scores with Roczen on the day. The performance left the lead duo with an even draw in points on the day, maintaining the 39 point gap.

Tomac finished third overall for his fifth podium performance of the season as he notched 4-3 moto scores on the day. Tomac heads now sits firmly in third in the championship for his final run aboard the Monster Energy Kawasaki.

Proving he’s got the speed to battle at the front, Sexton managed fourth overall on the day with 3-4 finishes. The second-year premier class rider is chipping away at it as he looks for his first overall win of the season in the last three rounds.

Webb put his Red Bull KTM inside the top five by way of two impressive starts. The North Carolina rider and reigning 450SX champion finished with 5-6 moto scores on the day.

Joey Savatgy (Rocky Mountain ATV/MC KTM) backed up the speed he showed in the previous round by taking home sixth overall. Savatgy’s consistent 6-7 scores put him just in front of the factory KTM of Marvin Musquin in seventh.

Musquin managed 10-5 scores, unable to back up his podium performance in the previous round of racing at Unadilla, though he showed plenty of speed in the final moto of the day.

A consistent day for Dean Wilson (Rockstar Energy Husqvarna) that saw him take 8-9 in the motos put him eighth overall. Wilson continues to fight for top 10’s after a season full of injury and illness.

Coty Schock again put his FXR Chaparral Honda inside the top 10, finishing ninth overall on the day. Budds Creek being a home round for the Delaware native, Schock put on a show for his home crowd with 7-11 finishes in the motos.

Rounding out the top 10 was another impressive performance for an improving Max Anstie. Anstie and the Twisted Tea HEP Suzuki team have been working hard to bring a competitive RMZ450 to the track and were rewarded today with 9-10 finishes.

The points gap now sits at 39 between Ferrandis and Roczen as the series is now down to just six motos to go, with Ironman in Indiana as the next race on the list on Saturday 28 August. 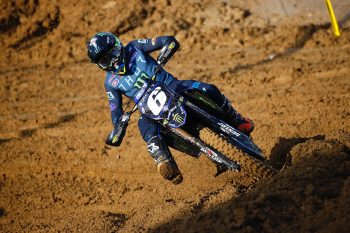 In 250MX action, Jeremy Martin dominated the second moto of the day to secure his third overall win of the season in round nine at Budds Creek.

While the 2021 Lucas Oil Pro Motocross championship has not quite gone the way he’d envisioned it, Martin has managed to find a rhythm, now taking three of the last four overalls victories.

Cooper launched out to a near 10-second lead in the opening five laps, running nearly three seconds a lap faster than the rest of the field. On lap six, Lawrence surged, making two passes and getting into fifth within two corners.

Lawrence then worked his way into third and set out after Forkner who was four seconds ahead. With 10 minutes to go, Lawrence caught the back of Forkner, making the pass a few minutes later.

Meanwhile, Jeremy Martin (Monster Energy Star Racing Yamaha) had caught Forkner in third, eventually making the pass with just over a minute to go in the moto.

While Lawrence had clawed his way toward the front, Cooper maintained the gap at the front and managed to take the win by five seconds, with Martin in third.

In moto two, Martin stormed to the front to take the holeshot ahead of Jett Lawrence and Ty Masterpool (GasGas), with Cooper mired outside of the top five. Martin and Lawrence immediately began to open a gap on third.

Cooper found his way into the top five, settling in behind Hunter Lawrence (Team Honda HRC) as the duo worked past Masterpool who hit the ground early in the moto.

Maintaining a big gap at the front, Martin churned out flawless laps to take the second moto win over Jett Lawrence to take home the overall victory on the day.

Jett Lawrence’s 2-2 scores gave him second overall on the day and allowed him to pull back one point in the championship standings which closes to three points with three rounds to go.

Cooper would finish third overall on the day after revealing he’s been dealing with an illness through the week, which ultimately held him back in the second moto.

Hunter Lawrence held his own and maintained the gap over Cooper in the second moto to secure 6-3 moto scores and fourth overall on the day. Lawrence dropped six points to Martin and fall to fourth overall in the standings.

Fifth place on the day went to Forkner who found the front early in both motos to secure one of his best finishes of the season. The much-needed resurgence saw him go 4-5 on the day, he’ll be working for a podium in the final three rounds.

Forkner’s teammate Shimoda battled through the day eventually ending up taking home a pair of seventh-place finishes for sixth overall, just ahead of RJ Hampshire (Rockstar Energy Husqvarna) who went 9-6 for seventh.

Masterpool had another breakout ride for his career-best result. The privateer GasGas rider was inside the top three in the second moto before a mistake cost him. He’d eventually finish 8-9 for eighth overall.

BarX Chaparral Suzuki’s Dilan Schwartz continued his great run of form going 10-8 for ninth overall on the day. Schwartz edged out Swoll who finished 5-15 on the day to round out the top 10.

The championship is tighter than ever as the series heads to round 10 at Ironman next Saturday 28 August for two of the final six motos of the season. 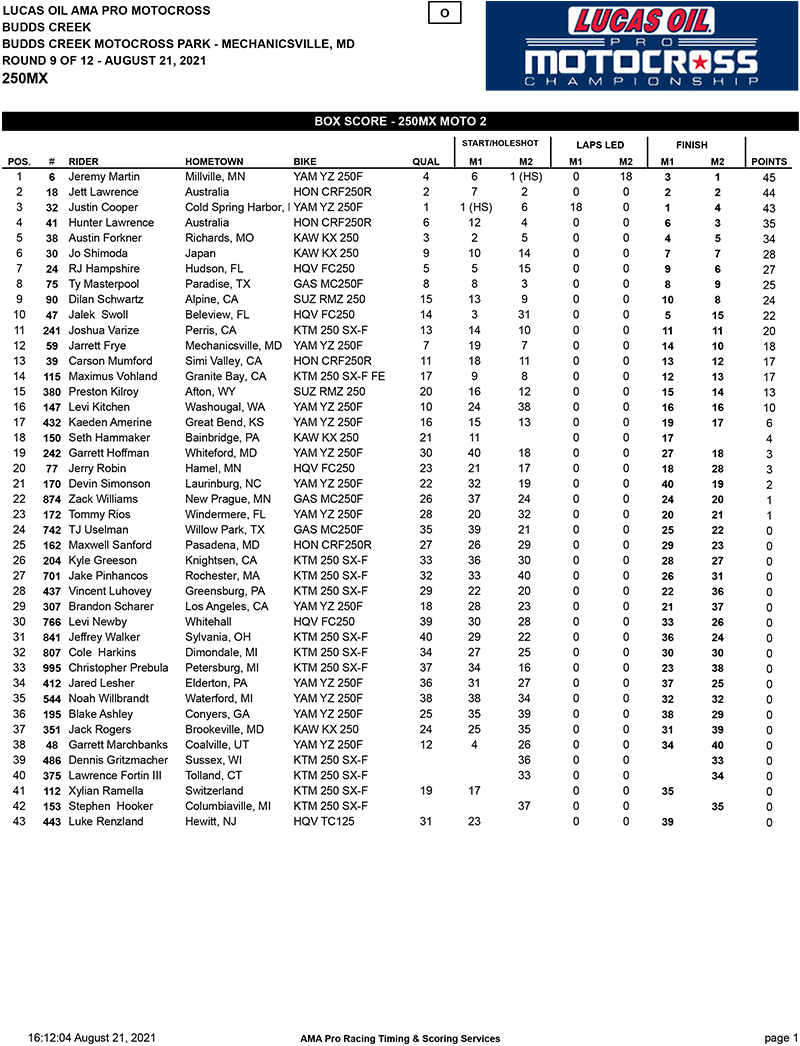 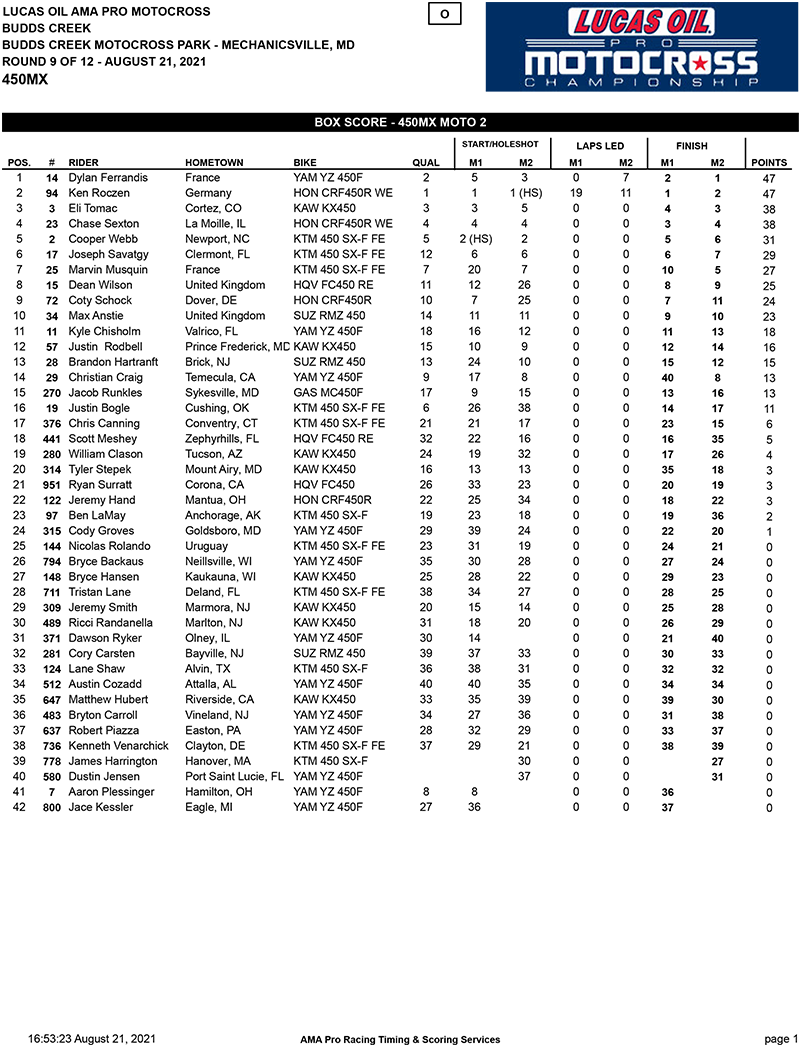