Multiple countries impacted by scheduling of event during MXGP season. 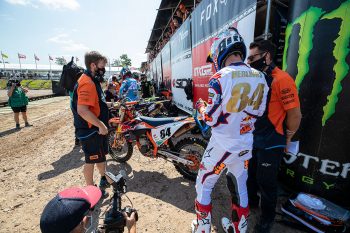 Teams entering the 2021 Monster Energy Motocross of Nations (MXoN) continue to take shape as several nations have announced their line-ups, while speculation builds around those that haven’t.

Positioned between rounds of the MXGP World Championship, decisions have been made by a mix of title contenders not to represent their countries in the standalone international.

However, the defending champion Netherlands team will be led by Jeffrey Herlings in MXGP alongside Glenn Coldenhoff (Open) and Roan van de Moosdijk (MX2), pending recovery from a broken scaphoid.

Spain will be missing multiple MX2 world champion Jorge Prado, as well as Ruben Fernandez, instead set to include Jose Butron in MXGP, Yago Martinez in MX2 and Ander Valentin in Open.

A notable absentee in the Belgian team is Jago Geerts, also opting to miss the event in order to focus on capturing the MX2 world title. Taking the gate in MXGP is Jeremy Van Horebeek, with Liam Everts lining up in MX2 and Brent Van Doninck in Open.

It was previously reported that Team France will have US-based Marvin Musquin in MXGP, joined by reigning world champion Tom Vialle (MX2) and Mathys Boisrame (Open). Both Romain Febvre and Maxime Renaux opted to miss the event in order to focus on the world championship.

Team USA has been linked to fielding Chase Sexton and Justin Barcia on 450s, while RJ Hampshire is tipped for the MX2 seat since riders from Star Racing Yamaha including Pro Motocross leaders Justin Cooper and Dylan Ferrandis – absent from France – won’t be available. Ken Roczen has also confirmed he won’t represent Germany.

Australia was initially expected to field Hunter and Jett Lawrence, however, with GP regular Jed Beaton due to ride MX2, sources suggest the Lawrences won’t step up to the 450 for a one-off outing. Instead, Mitch Evans could be the ideal candidate if fit, as well as Wilson Todd or Bailey Malkiewicz – all of those riders based in Europe.

The 2021 Motocross of Nations (MXoN) is set to take place on 25-26 September in Mantova, Italy, marking the 74th edition of the event.