Australian's round plagued with bad luck and misfortune at Lommel. 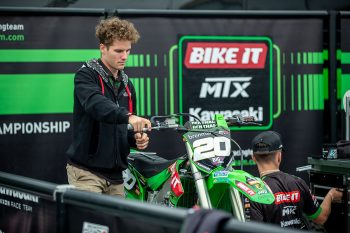 The opening moto saw Todd recover to 14th from the back of the pack, before damage to his oil cooler hose meant he had to retire.

In moto two the 23-year-old made a good start before an early mistake in the third turn cost him valuable positions, and could only recover to 23rd after a lack of vision and further mistakes hindered his progress.

“Today was a day to forget, really,” Todd explained. “I came from the back to about 14th by halfway then the oil cooler hose was damaged, so I only managed to make it about three corners further, before I had to retire.

“I got a good start in moto two, but a mistake going into the third corner and I lost control. I did my best to charge through and ended up making [mistakes] a few more times just not really been able to see where I was going. It’s one to learn from for sure.”

While team manager Steve Dixon also saw the MXGP of Flanders-Belgium as a day to forget, he remains optimistic that Todd can be back up the front when racing resumes in Latvia.

“Wilson rides well in the sand, he qualified okay but a first corner entanglement in race one meant he had to come through the pack, after coming together with another rider the hose on the additional oil cooler must have got damaged, which meant he had to retire,” Dixon stated.

“It’s a shame as until now all the races have been good point-scoring rounds. Pumped up heading into race two, he grabbed a much better start, but a mistake cost him his good position and he never really got the rhythm back after that. A day to forget, but we head to Latvia confident about seeing Wilson fighting with the top guys where he belongs.”

The MXGP of Latvia will take place this weekend on 8 August at Kegums, which marks the seventh round of the MX2 World Championship.