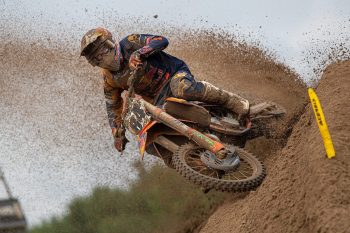 After breaking his shoulder blade just 13 days prior, Jeffrey Herlings returned to action for the Grand Prix of Flanders-Belgium and kept his title hopes alive in dramatic fashion.

Herlings was landed on in an incident at round four’s MXGP of the Netherlands and suffered a broken shoulder which looked to end his hopes of a championship in 2021.

He then sat out the fifth round of the championship, the MXGP of Czech Republic at Loket, and dropped to 51 points back of championship leader Tim Gajser (Team Honda HRC).

Just days before round six at Lommel, Herlings put his shoulder to the test at a local track in the Netherlands and opted to line up for the race, pulling off heroics to bring home a moto win and notching 1-5 for second overall.

“We didn’t ride much in practice but we had a good gate pick and then in the first moto Romain had a really good pace, so I just sat there to save energy,” Herlings explained. “As everybody knows, I broke my shoulder blade and it’s not normal to be riding again in thirteen days.

“I didn’t know if my speed would fade because the track was so rough and hard on the body. At one point I felt I could run a faster pace. I passed Romain and made a gap.

“I started well in the second moto – fourth or fifth I think – but came together with Glenn going for an inside line. It was a shame to be last but I fought my way back to 5th…then I faded!

“I couldn’t hold onto the bike that well and I didn’t want to make a big crash.”

Herlings admits he thought his championship was over after missing round five, but with 12 rounds left on the calendar, the now 42-point leaves him with a shot at the championship.

“To go 1-5 is a good day, he continued. “One week ago we thought the championship was over – and I still need to hunt down the points – but 42 points is not too bad and there are still a lot of races and options ahead.

“42 away is not where I want to be but if I had this offer a week ago I would have signed for it.”

The series now heads to Kegums for the MXGP of Latvia this weekend, 8 Aug, where Herlings will look to continue building momentum.