‘Fifth overall on a bad day not so bad’ – Beaton 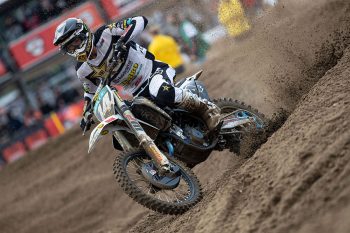 Amidst a challenging day in the sand at Lommel, Jed Beaton has labelled ‘fifth overall on a bad day not so bad’ as he brought away another solid haul of points in the MX2 World Championship.

Beaton had a dramatic first moto, narrowly missing a crash at the start before crashing on his own which left him with lots of work to do to recover positions.

The 23-year-old did not lose heart and remounted to charge back through to eighth, just 0.302 seconds short of finishing seventh.

Race two saw the Rockstar Energy Husqvarna rider launch to an average start, again making his work cut out to get to the front. By the time he was into the top five the leaders had already created a gap meaning fifth was the best he could manage.

“Today was a little bit of a bad day, but if I can take fifth overall on a bad day then it’s not so bad,” Beaton explained post-race.

“I was fortunate in race one to miss a big crash just after the start, but then while in sixth I crashed on my own and fell way down the field. I got back to eighth which was ok though.

“My start in race two wasn’t so good and by the time I got into fifth the leaders were gone. It was unfortunate but fifth was good and solid points overall so all things considered, I’m happy with today.”

Fifth in the MXGP of Flanders-Belgium marks Beaton’s third consecutive top-five finish, now sitting seventh overall in the championship standings – five points adrift from fifth as the series heads to Kegums next on 8 August for the MXGP of Latvia.