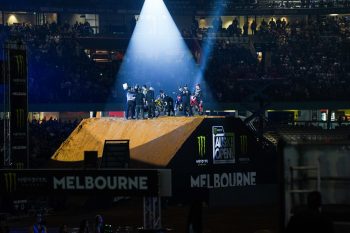 The AUS-X Open Melbourne is now ‘very unlikely’ to go ahead in 2021 for the second year running, however promoters of the event haven’t completely given up just yet.

It was revealed last month that the Australian MotoGP and Formula 1 grand prix were cancelled, where the Victorian Government cited a slower than forecast vaccination rollout and international arrival caps in their announcement.

The decision to cancel both high-profile motorsport events immediately cast doubt on the AUS-X Open, which is only viable if international athletes can enter the country, although as it stands, they would need to be granted travel exemptions and a quarantine arrangement would need to be made.

Admitting it’s very unlikely the event will proceed this year amid the ongoing outbreaks across the east coast of Australia and strict conditions on international arrivals, event co-founder Adam Bailey hasn’t completely shut the door on the 2021 edition, explaining the AUS-X Open has much lower requirements than the now-cancelled Australian grand prix events.

“It’s looking very, very unlikely for this year,” Bailey told MotoOnline.com.au. “But, we have a really solid replacement plan, I guess, that we will announce shortly. We’re working on what the series will look like with that grand final event.

“As we’ve seen with Formula 1 and MotoGP, if they can’t do it, it’s obviously very difficult. Although, we have much less requirements than what they do, so we’re still pushing as hard as we can.”

Plans are still in motion to run a five-round Australian Supercross Championship this year despite the likeliness of the AUS-X Open being cancelled.