Australian WMX international is hungry to continue her rise through the ranks.

While most Australians are keeping an eye on Jed Beaton and Wilson Todd in MXGP, there’s another Aussie who’s starting to make a name on the world stage as Perth’s Tahlia O’Hare is contesting the Women’s Motocross World Championship with the reputable Team Honda 114 Motorsports outfit.

This season marks the third year that ‘TJ’ O’Hare has contested the championship after first taking the plunge to race the world’s fastest women in 2019. Only 17 at the time, it was a big step, but one that she and her family knew she had to take if she wanted to keep developing as a racer.

“There’s very little in the way of women’s motocross in Australia and after my first year in seniors I was already battling up the front,” O’Hare explains. “The ceiling was pretty low and I wanted to achieve bigger things and race more girls, so we thought we’d give Europe a shot.”

Riding for the KTM Diga Junior Racing Team for 2019 and 2020, she admits to being star-struck lining up against some of the series’ leading girls to begin with.

“The first year especially was a bit of a shock, coming to terms with being away from the family, dealing with the language differences, the gnarly tracks and racing against girls I’d watched growing up,” she says. 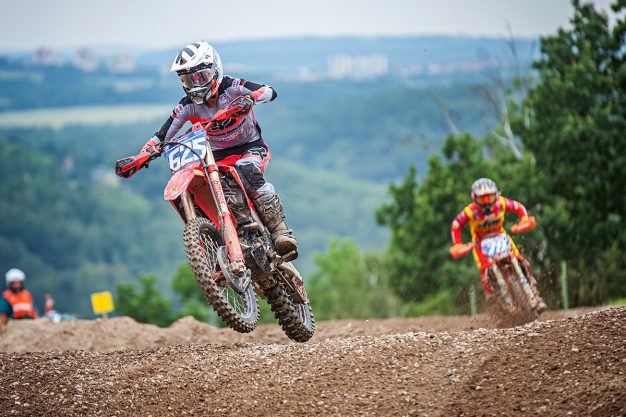 “Even last year I was a bit star-struck and wondered if I belonged there, but now it’s cool – I’m good mates with Courtney Duncan and a lot of the other girls and I feel a lot more comfortable now.”

O’Hare raced two rounds of the 2019 championship before breaking her arm during the opening round at Loket and missing the rest of the championship.

Last year she completed the full five-round championship and finished 10th overall, including an impressive eighth place race result at Valkenswaard and a 10th overall at the Lombardia GP. For TJ, the upswing in results were a testament of how much her speed and technique had improved.

“Over the winter break between 2019 and 2020, I put in a lot of work and I improved my time at the training track by 10 seconds a lap,” she describes. “My aim for 2020 was to finish top 10 in the championship and I was pretty proud to achieve that – I think that’s been the highlight of my career so far.”

For 2021, O’Hare is riding for France-based Team Honda 114 Motorsports and is riding under the guidance of three-time world champion and team owner Livia Lancelot.

“It has been amazing being able to work with Livia,” she adds. “She might own the team, but she’s right there at our training sessions, she coaches me and gives me plenty of tips and advice at the races.

“Having a world champion that we can lean on is awesome and it’s definitely helped me make some big gains again this year, even though I didn’t really get to show it on the weekend.” 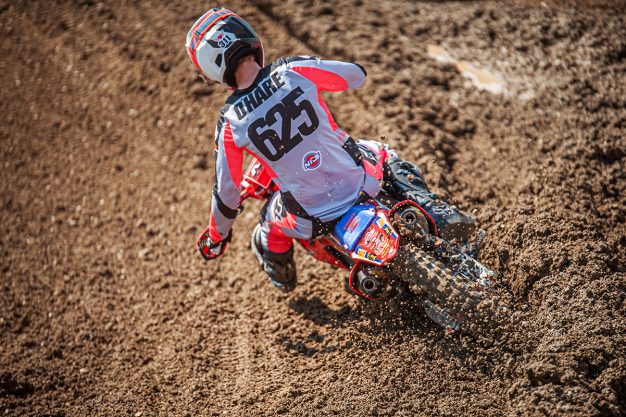 At the weekend’s opening round of the 2021 championship at Loket, the now 20-year-old Western Australian finished 14th overall. Despite suffering a mechanical issue in the opening race and ultimately finishing 26th, she’d charged through the pack 30th to 12th before the gremlins took hold.

In the second moto she put a mid-pack start behind her to work her way up to 10th before arm-pump set in: “Honestly, I was pretty happy with my pace and form. No-one could control what happened in that first moto and in the second race I showed I can finish in the top 10 with a bad start and struggling to gel with the track.”

The second round of the WMX championship heads to the deep sands of Lommel this weekend and it’s a track she’s spent a lot of time at with her former team.

“I’m a lot more comfortable in the sand and mud than I am on hard-pack tracks, so I’m really looking forward to redeeming myself this weekend,” TJ says. “My aim this year is to consistently finish inside the top 10 and prove how much I’m progressing as the season continues.”

As for the future, the ultimate goal is to remain racing in Europe, with the intention of making a concentrated pitch for the world title one day.

“Financially, we kinda have to take it year by year for now – if I get good championship results I’d love to stay with the team for a few more years and make my way to the front of the championship,” she continues. “We’ll concentrate on 2021 for now, do the best we can, then see what happens from there.”