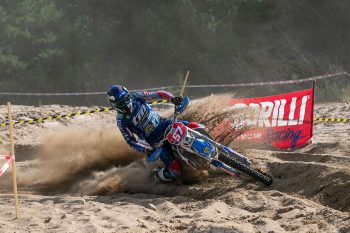 Victory on day one in Sweden has held Wil Ruprecht in EnduroGP World Championship title contention with two rounds remaining.

TM rider Ruprecht went 1-5 across the weekend and is currently third in the standings, just 26 points outside of the lead with two rounds remaining.

“Today was good,” Ruprecht said on Saturday, who also won E2 and leads that title. “The tests were nice to ride, but also a little scary in places – you certainly didn’t want to be making any big mistakes.

“I just rode a strong but steady pace, hit my marks, and tried not to over ride the bike. I think there’s a little more that I can give, but it was a good day.”

While Ruprecht won the opening day ahead of Josep Garcia (Red Bull KTM Factory Racing) and Beta-mounted Brad Freeman, it was Freeman who topped day two. It is Freeman who is atop the points ahead of October’s GP of Germany.