Ultimate preference is that both series' are completed in full. 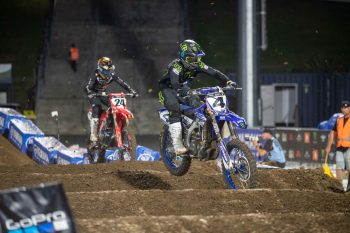 The possibility of the Penrite ProMX Championship overlapping with the 2021 Australian Supercross Championship is ‘not ideal’ according to the series promoter.

The ProMX championship has been thrown into chaos over recent months amid the resurging pandemic across the east coast of the country, forcing Motorcycling Australia to postpone its Wodonga, QMP, and Coolum ProMX rounds.

As it stands, the next round of ProMX is pencilled in for 4-5 September at Gillman in South Australia – a rescheduled date after being postponed in May.

The three remaining rounds are yet to be rescheduled, making it likely they could take place between AUS Supercross rounds, with the series currently outlined to commence on 16 October – however, an official announcement for the championship is yet to be made.

“It’s not ideal,” AUS SX Holdings co-founder Adam Bailey admitted to MotoOnline.com.au. “But, I think it’s everyone’s preference that both championships go ahead so they can fulfil their team and sponsor obligations, and get on with business.

“It’s not ideal and I don’t think anyone would be wrapt about that they could be so close or overlapped. But at the same time, we’d definitely prefer that than to not have them at all.”

It was revealed last week that AUS SX Holdings has every intention of running a five-round series, while also confirming the championship will head to Perth for the first time in over a decade.

The Australian Supercross Championship is set to see a number of changes for 2021 that are still to be formally announced, including a title sponsor, broadcast package, and a new promoter group.